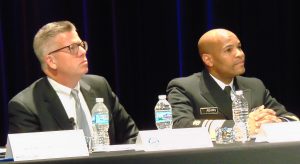 “My own brother is currently serving a 10-year prison sentence for stealing $200 to support his addiction,” he told an audience at Waubonsee Community College on Wednesday.  “Unfortunately, like my own family, families across Illinois aren’t strangers to this opioid epidemic.”

But Adams, who also serves as U.S. Surgeon General, has unique leverage to broadly address the evolving public health crisis.

The nation’s top health official was the featured guest at a 90-minute panel discussion on opioid use and abuse hosted by U.S. Rep. Randy Hultgren (R-14th).

“I’m here today mostly to tell you to stay the course,” Adams said. “Keep doing the things that you all are doing, because they are making a difference, even though the epidemic seems like in many ways it may be getting worse.”

Opioids include prescription pain relievers, heroin, and synthetic opioids such as fentanyl.

Adams said dealing with and treating victims of the opioid epidemic has been like hitting a moving target.

“The opioid epidemic is not getting worse insomuch as it is evolving,” Adams said. “Initially it was a prescribing epidemic and we tamped down on prescribing. And people shifted over to heroin and it was a heroin epidemic. (Now) we’ve seen our heroin numbers level off. Now it’s evolved into a fentanyl epidemic and we’re seeing death rates going through the roof.

“But it doesn’t mean that what we’re doing isn’t working. … The more we bring partners together and build a comprehensive response that includes prevention and treatment — treating the symptoms as well as treating the problems — the quicker we’ll find we’re in a better place.”

Last month, Adams issued a Surgeon General’s Advisory emphasizing the life-saving use of Naloxone, an overdose reversal agent that helps revive people who would otherwise die due to a lack of oxygen caused by  opioids in their bodies.

Hultgren said combating opioid abuse has been a priority since he convened a forum on heroin prevention in Kane County four years ago.

“Our hope is this brings attention to a national epidemic, to tell the stories who have been touched by it, to identify our challenges as a community and to come to come together on solutions,” he said.

“The faces and the stories of heroin are real and those family members, friends, students and loved ones who have been affected by it demand and deserve answers from us.”

Opioid use and abuse led to an estimated 60,000 deaths nationally in 2016, more than peak years of the Vietnam War or the AIDS/HIV epidemic, according to a New York Times study.

“Highly addictive opioid medications — Vicodin, Percocet, OxyContin and others — have been improperly marketed to the medical community as the most effective method for treating pain,” according to Prescription Nation 2018, a National Safety Council report. “Since the 1990s, opioids have been liberally prescribed, setting the stage for a flood of people suffering from opioid use disorder, overdose and death.”

Adams was named the nation’s 20th Surgeon General by President Donald Trump and sworn in last September. A board certified anesthesiologist, he served as Indiana State Commissioner from 2014-17.

At his swearing in, Adams called the opioid epidemic among his top priorities.

“Recovery is possible,” he said. “(But) we have to fix the system, that’s what’s broken.”