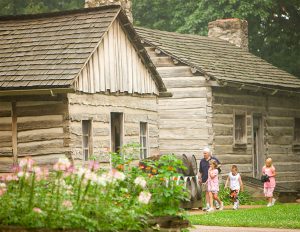 Lincoln’s New Salem, a state-run historic site that recreates the village where Lincoln lived as a young man, is Illinois’ top history site according to voters in a survey.

The list of top state historic sites chosen by voters in the Illinois Top 200 project and cover more than 1,000 years of history, from Cahokia Mounds to Abraham Lincoln’s home to Route 66.

“Historic sites let us connect with the past in a direct, personal way. We literally walk in the footsteps of those who came before us,” said Dr. Samuel Wheeler, the state historian. “Illinois is fortunate to have dozens of fascinating sites, and this list reflects that. A Native American city, French forts, Lincoln, Reagan, labor battles – the variety is amazing.”

The list also honors the state’s French heritage, industrial might and national leaders. Geographically, the sites range from deep southern Illinois to the prairies of central Illinois to Chicago’s South Side.

No. 1 on the list is Lincoln’s New Salem, a state-run historic site that recreates the village where Lincoln lived as a young man trying to decide what to do with his life.

Next comes Pullman, which is simultaneously a Chicago neighborhood, a national monument and a state historic site. It was an early planned community, the focus of a historic strike and an important manufacturing site.

The John Deere site in Grand Detour and Lincoln’s Home in Springfield came in at 3 and 4.

The Illinois Top 200 project lets Illinoisans vote every two weeks on the most inspiring leaders, greatest books, top businesses and much more. By the state’s 200th birthday on Dec. 3, voters will have chosen 10 favorites in 20 different categories – the Illinois Top 200.

Voting in the next category, top scenic spots, is underway at www.IllinoisTop200.com . Nominees include the Chicago lakefront, Garden of the Gods, Starved Rock State Park and Allerton Park.

Among the sites that did not make the top 10: Nauvoo, once the headquarters of the Mormon church; Black Hawk, the park honoring the famous war leader and the Sauk and Meskwaki people of the region, and New Philadelphia, the first town registered and platted by an African-American.

Wheeler noted the top 10 includes sites run by the state, the federal government and private organizations. “Preserving Illinois history and helping people understand it is a team effort. As Illinois celebrates its 200th birthday, I hope everyone will take advantage of these opportunities to explore the past and think about the future.”

The Illinois Top 200 is a joint initiative of the Abraham Lincoln Presidential Library and Museum, The (Springfield) State Journal-Register and the Illinois Bicentennial Commission.