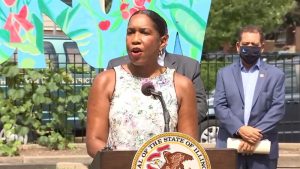 SPRINGFIELD — Gov. J.B. Pritzker spoke in Berwyn on Thursday, Sept. 3 to promote the 2020 U.S. Census as the Sept. 30 deadline for states to get their residents counted approaches.

He was joined by Lt. Gov. Juliana Stratton and U.S. Rep Jesús “Chuy” García among others.

Pritzker and Stratton both emphasized the importance of an accurate census count, as response rate and population estimates are tied to federal funding and the apportionment of seats in the U.S. House of Representatives. A low response rate can also put millions of dollars in federal funding at risk across Illinois.

“The higher the count, the more of your federal tax dollars come back to Illinois instead of going to other states,” Pritzker said. “Just a 1 percent undercount, could result in the state losing over $195 million in federal funds at a time when we frankly need the full funding we can get from Washington (D.C.) the most.”

That amounts to approximately $15,000-$20,000 lost in federal funding per person undercounted in the census, according to García.

“We come together today to remind our neighbors and families that everyone counts, regardless of citizenship and age,” García said. “In 10 minutes, you secure $20,000 over the next 10 years for our communities, for your families.”

According to Pritzker, Illinois is one of 10 states that pays more in federal taxes than it receives in federal funding. A high response rate to the 2020 census can change that.

As the novel coronavirus pandemic wreaks havoc on the U.S. economy and tax revenue across the country and in Illinois, Pritzker stressed the importance of the census as it pertains to aid. Apportionment of federal funding from the Coronavirus Aid, Relief and Economic Security, or CARES Act is partially based on 2010 census counts.

Stratton also emphasized the need for Latino Illinoisans to participate in the census and addressed fears of retaliation.

“Our census doesn’t hurt, it helps. The census questionnaire will not ask your citizenship status,” she said. “Your personal information will not be used against you in court or by any government agency like ICE (U.S. Immigration and Customs Enforcement). For far too long some members of our Latino community have been told to keep their doors closed and not be seen, but no more. You have the power, and you deserve to be seen and counted,” she said.

The Trump administration attempted to add a citizenship question to the 2020 census, but those efforts were blocked by multiple federal courts last year. It does not appear on the final form, and any respondent information is kept confidential by law.

As of Wednesday, Illinois was number 7 in terms of self-response, with a 69.8 percent rate. Illinois ranks 12th in total “enumeration,” or the percentage of households in the state that have been counted in the census, at 89.8 percent. Among states with a population over 10 million, Illinois ranks first in both categories.

In 2010, which only allowed self-response via mail, Illinois had a 70.5 percent response rate. The 2020 census allows for residents to self-file a form online, through mail or by phone.

The state is on track to meet its 2010 response rate, but structural obstacles to filling out the census have kept response rates low in some parts of the state, including some rural counties and several census tracts on the south and west sides of Chicago among others.

Lack of access to broadband internet, the prevalence of P.O. boxes which the Census Bureau does not send forms to, and the difficulty census door-knockers have reaching rural residents all factor into some county’s having response rates as low as 33.4 percent.

The state has just 27 days to increase its response rates after the Trump administration shortened the deadline for reporting from the end of October to the end of September.

A federal lawsuit to restore the original deadline is ongoing.