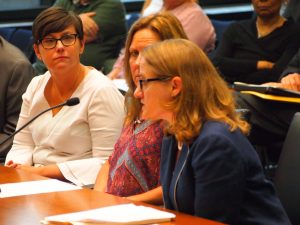 Danielle Gomez (right), supervising attorney in the Cook County Office of Public Guardian, talks to state officials about the problem of children and teens in the custody of the Department of Children and Family Services being kept in psychiatric hospitals because there are not licensed residential treatment facilities to take the youths. Listening to Gomez’s testimony are (left) Carrie Overbey, director of clinical services at Riveredge Hospital in Forest Park, and Deb McCarrel, director of policy and government affairs for the Illinois Collaboration on Youth, representing more than 80 youth service and child welfare organizations. (Kevin Beese/Chronicle Media)

“Alyssa” has gone through more traumas in 11 years than most people experience in a lifetime.

The 11-year-old girl alleges that she had been sexually abused twice — once by the grandson of a foster parent, the other by a taxi driver contracted to take her to and from school.

“Alyssa” (not her real name) has been in the custody of the state’s Department of Children and Family Services since she was 4 when she was taken from her home covered with welts from physical abuse. She has been placed in six different foster homes.

“To think about what this child has experienced at the age of 11 is absolutely overwhelming and extraordinary,” said Danielle Gomez, supervising attorney in the Cook County Office of Public Guardian, which oversees Cook County residents in DCFS custody.

Suffering from post-traumatic stress disorder, major depressive disorder and other issues, Alyssa’s condition has gone beyond being able to be cared for in a home. She needs residential care at a licensed facility, but because of the limited number of facilities providing such services, she has been kept waiting in a psychiatric hospital for more than 90 days.

She is 19th on the waiting list at a facility that normally has one opening every 60-120 days.

“That’s something that we hear very commonly: ‘The next opening might be in 60-120 days and your kid is number 19 on the waiting list,” Gomez said.

Alyssa is one of hundreds of wards of the state deemed “Beyond Medical Necessity” — individuals needing licensed residential facilities, but being warehoused in psychiatric hospitals because that’s where they were taken during violent behavior and now they must wait for openings in residential facilities.

“When children are admitted, they are there for a period of time. It’s kind of like being in the ICU at a hospital. At some point, you don’t need to be there anymore. Although you may need some level of care and treatment, you don’t need to be at that level of care,” Gomez said. “These children reach that point. They finish the treatment they need in the hospital. They are ready to be discharged and then they are left behind in the psychiatric hospital.”

Gomez said that in fiscal year 2018, 300 individuals in DCFS custody, ranging in age from 6-20, were deemed Beyond Medical Necessity and housed in mental hospitals. That is up from just 75 in 2014.

According to Gomez, 20 percent of the 300 wards of the state were 11 years of age or under.

“BMN is a real significant symptom because it is such a restriction on a child’s civil rights to be kept in a hospital,” Gomez told state senators and representatives during an Aug. 14 hearing on the Beyond Medical Needs issue. “But it’s a much bigger problem we have in terms of meeting the needs of our children with high-end needs with safe, appropriate placements in our state.”

Gomez noted per state law DCFS needs to place children in the least restrictive, most family-like setting appropriate to meet the child’s needs.

“There is an urgent and unmet need for therapeutic homes and placements for children in our state,” Gomez said.  “This has been a problem that has been going on for years and it’s become worse over the last few years. The numbers make that very clear.”

The public guardian said she regularly hears that kids are harder and more complex now as a reason for the spike in DCFS wards needing placement in residential facilities.

“It doesn’t make any sense to me. Why would children be more complex now than they were five years ago?” Gomez asked.

She said more of an impact has been the state’s path to reduce beds in residential therapeutic programs. There are 500 less beds for individuals needing residential care than there were five years ago, according to Gomez.

“We have fewer placements and more kids waiting for them,” Gomez said.

Deb McCarrel, director of policy and government affairs for the Illinois Collaboration on Youth, representing more than 80 youth service and child welfare organizations in the state, said the Beyond Medical Need problem is systemic of the myriad of problems the General Assembly must start addressing.

“By the time a child is sitting in Beyond Medical Necessity, the damage is done,” McCarrel said. “The state service delivery system has missed opportunity after opportunity to keep families united and supported. We have missed the opportunity to give families options and access to less-costly community-based services much earlier, to keep them from sinking deeper into a system that only compounds the issues and rips them apart.”

She noted parents, in some case, have relinquished custody of their child to the state just so the individual can get the assistance he or she needs.

“I can’t think of a more traumatic experience for a parent,” McCarrel said.

— With residential beds dwindling, wards of state have nowhere to turn—-