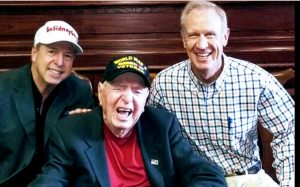 Sidney Walton (center), one of the oldest surviving World War II veterans; his son, Paul; and Gov. Bruce Rauner share a laugh while posing for a photo during the Walton’s visit to Springfield. Sidney Walton’s “No Regrets Tour” is aimed at giving people across the country an opportunity to meet a WWII vet. (Photo courtesy of GoSidneyGo.com)

Paul Walton is happy that his father, one of the oldest surviving World War II veterans, is doing a little to bring America back together.

Sidney Walton’s “No Regrets Tour,” which was in Illinois through July 9, is about giving people a chance to meet a WWII vet, his son noted.

“There is so much divisiveness in our country,” Paul Walton told Chronicle Media “We transcend all that. This is not a political mission. We are meeting people from all walks of life, all political affiliations. That’s what makes this so exciting. I am so happy we are doing what we are doing. I would not have it any other way.”

Illinois marked the 11th leg of the tour aimed at meeting the governors of all 50 states and culminating at the White House on Feb. 11, Sidney Walton’s 100th birthday.

“I’m up for that,” Sidney Walton said.

His son, Paul, said the joy on people’s faces when they meet his father is amazing.

“It’s a win-win-win-win-win situation. It’s a win for them, for my dad, for me, for everyone who witnesses it, for the news media who cover it and the people who follow the trip,” Paul Walton said. “It’s a win to the nth degree. It makes him and me so happy and there are so many smiles on people’s faces when they meet him.”

After a July 3 meeting with the Land of Lincoln’s governor, Bruce Rauner, Sidney Walton met the media and was eager to let everyone know his favorite president.

“Lincoln!” he belted out from his wheelchair.

“He’s not pandering to the press,” his son said. “He has always liked Lincoln.”

Rauner thanked Sidney Walton for his service to our country.

“You’re a hero,” Rauner said to Sidney. “You’re part of the greatest generation. You’re our hero. All of our fellow veterans thank you for being an advocate to celebrate all of our veterans. You make America the greatest nation.”

The No Regrets Tour stemmed from an aching void Sidney Walton has felt ever since a young man in New York, his son told Chronicle Media.

“He had the opportunity to meet Civil War veterans when young, but he didn’t do it,” his son, Paul, said. “He figured there would be another opportunity or that they would also be there the next day.”

Sidney Walton did not meet those Civil War veterans and the decision bothered him for decades.

“Ever since,” Sidney Walton said of his regrets of bypassing that meeting with Civil War veterans.

“He realized that things in life are fleeting,” Paul Walton said. “He carried that one regret with him all of his life. At 99, I said, ‘We are going to go and make you feel much better. We are going to ease your burden. We are going to give people the opportunity to meet one of the last surviving World War II vets.’

“We wanted people to take advantage of meeting a World War II vet. So many people are aghast that he is still alive. They are so happy to meet and talk with him.”

Paul said his dad does not want anyone to live with the regret of not meeting a World War II veteran so he is making himself available across the country.

“I like meeting all the wonderful people,” Sidney said.

Along with meeting with the governor and seeing the Lincoln sites in Springfield, the Waltons’ time in Illinois included being the first lunch guests at the governor’s renovated executive mansion, Sidney being honored at the Chicago Cubs game on July 4 and seeing fireworks at Chicago’s Navy Pier.

“We use a GPS for getting place to place. We learned that in Chicago you also have to check the weather radar,” Paul Walton laughed of getting caught in a deluge during the Navy Pier fireworks. “We’re from San Diego. We’re not used to that. But dad survived World War II. He can survive Mother Nature at her finest.”

A member of the Army, Sidney Walton fought in the China Burma India Theater during World War II. He served in the Army for five years.

“He enlisted in March 1941, eight months before the war. He wanted to go fight (German leader Adolph) Hitler,” Paul said of his dad.

Sidney Walton had been slated to ship out with the rest of his platoon to fight in the Battle of the Bulge, the last major German offensive on the western front during the war. However, while going through exercises the day before their departure, Sidney shattered his ankle.

Sidney never heard from any of his platoon mates ever again, assuming that they all perished in the battle.

“We call it ‘our lucky break,’” Paul Walton said. “I am not making light of the situation, but that was a lucky occurrence for our family.”

After the military, Sidney taught geology at Duke and North Carolina State universities and then became a civilian employee of the government, living in San Diego.

Paul said some of the tour highlights so far have been meeting with New York Gov. Andrew Cuomo and attending the College World Series in Omaha, Neb.

“A wonderful bond has forged between us,” Paul said of caring for his father the last five years.

When Sidney turned 94, his son was still working and decided to take care of his dad.

“We decided to go to all the places on our bucket list. He helped save our country and save the world,” said Paul Walton, 62, a former hotel owner. “We went through our savings and we are into the credit cards, but I would not have it any other way. We will continue to do this until we’ve run out of places to go, or one or the other of us run out of good health.”

For information or Sidney’s journey or to donate to his tour, go to GoSidneyGo.com.