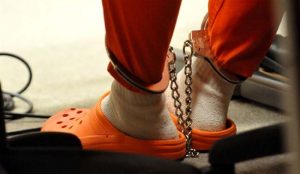 Juvenile justice advocates across the state have been working on an initiative for over a year to restrict the use of shackles around the wrists and ankles of youths appearing before a judge.

The practice, often enforced in cases where juveniles are charged with low-level crimes and who have no prior arrests, is harmful in several ways, Paula Wolff, director for the Illinois Justice Project said.

“Shackling juveniles in court is detrimental,” Wolff said. “There are really three fundamental reasons. The first is that children who are shackled, long-term, are traumatized and are hurt by being shackled. It’s a very constraining and frightening thing for many of them.”

The emotional trauma associated with being shackled also inhibits a juvenile’s ability to actively participate in their case.

Earlier this month, the Illinois Supreme Court Rules Committee held a hearing to discuss the issue. According to an expert who testified at the hearing, juveniles shut down when they are shackled and become less likely to communicate with their legal team, Wolff said.

“The third reason is that it does create a climate in the courtroom where the charge, no matter what it is – even if it’s a lesser charge – takes on a kind of a magnitude just by the visible appearance of somebody who’s in shackles,” she said.

Currently, no rule exists in Illinois mandating the use of shackles on juveniles in court. In cases where judges have ordered juveniles to be shackled, they have deferred to the guidance of a 1977 Illinois Supreme Court rule permitting the shackling of adults in court during hearings determining their guilt or innocence.

Under the proposed rule, judges would only be allowed to order restraints in some cases.

Thus far, 25 states have sought to outlaw or restrict the common practice of shackling juveniles.

Wolff said the severity of the crime should not determine whether a minor is put in a position where he or she would appear guilty before a verdict has been rendered in the case.

— Youth advocates push to restrict shackling of juveniles in court —