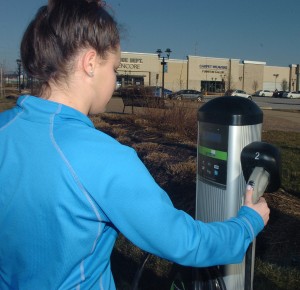 : Fourteen-year-old Shelbey Nichols prepares to charge the family’s plug-in hybrid 2016 Chevy Volt at a free public charging station in the Levee District in East Peoria. Sponsored by Uftring Automall, the charging station is one of several available in the Peoria area.

“I purchased a 2012 Chevy Volt in October of 2011. I had one of the first ones to roll off the transport truck in the central Illinois area,” said Nichols, a 34-year-old father of four. “The lack of charging stations was understandable as there were few options of PHEV/EVs at local dealers and very few on the road.”

“The only reason why I think sales are down right now is because gas is $1.70 a gallon. When gas was $4 we couldn’t keep them in stock,” said Rob Gregoire, sales manager at Mangold Ford in Eureka, which appears to have one of the few charging stations in Woodford County.

One of the first public charging stations for electric vehicles outside of car dealerships in Peoria was installed at Bradley University in early 2012. It’s the only location locally that charges a small fee for its use.

“We are always looking for ways to support energy conservation, and this seemed like a 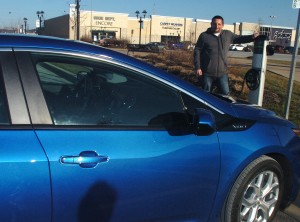 David Nichols of Yates City stands next to his 2016 Chevy Volt, one of three electric cars he’s owned or leased since 2011. Nichols commutes 53 miles daily to work in Peoria and frequently uses the public charging stations in the area to “top off” his car’s charge.

Neilson said Bradley has switched from the initial card swipe system that allowed charging for 75-cents per hour to a flat annual fee of $25 for the Bradley community users that use the chargers on a regular basis.

“The first public charging station I can remember opening was at the Riverfront Museum in 2012,” said David Nichols. “Over the past four years, the number of EVs in Peoria has gradually increased, and so has the public charging infrastructure. The Levee District in East Peoria put a big jolt in this as they incorporated four stations near Target and two in their library parking lot.”

“That came about from the mayor’s office interacting with Mr. Uftring, and we felt it kind of made sense to be progressive and have those charging stations down there,” Uftring General Manager Mike Bambrick said.

“Many dealerships, us included, have them available, and you’re seeing it become more common. Gas at $1.70 a gallon is not driving electric vehicles sales, obviously, but I think there’s going to be a bigger place in the future for hybrid vehicles,” Bambrick said.

Besides the Levee District, the only other public charging station in Tazewell County appears to be at Illinois Central College in East Peoria, according to the website www.plugshare.com, which tracks charging station locations.

There are several public locations in Peoria, including the Civic Center, McDonald’s on Knoxville and Hy-Vee near the Shoppes at Grand Prairie.

“I feel the Peoria area has an ample amount of chargers to handle the current population of vehicles,” Nichols said. He’d like to see the addition of a DC Quick Charger, which allows for faster charging. The nearest of these is located at the Uptown Station parking deck in Normal.

“Charging time is one of the biggest hang-ups with EVs as people are used to filling their gas tanks in just a few minutes versus waiting four hours for an EV to charge. These (quick chargers) help bridge that gap,” Nichols said. “A downtown location near the restaurants would draw in people that would’ve passed through otherwise. This would give them 45 minutes to explore the area and get a bite to eat while their car charges.”

Nichols, who lives in Yates City and commutes 53 miles daily to work in Peoria, owns a personal charging station at home and often “tops off” his car’s charge at one of the Peoria area stations on his lunch hour or while shopping. The Chevy Volt has an eight-gallon gas tank as back up if the car’s battery charge is depleted.

“I drove 951 miles straight without using gas since getting this car on Dec. 12,” he said of his current 2016 Chevy Volt. “I had to travel to Virginia to pick it up as it will not be available in central Illinois until late February. The new Volt is capable of 53 miles of all-electric range.”

Early in 2013, Nichols also leased an all-electric Nissan Leaf, which had an EPA range of 84 miles and no back-up gas tank. He put 30,000 miles on the car during the two-year lease and learned to plan his routes carefully to avoid “range anxiety” about being stuck on the side of the road if the battery depleted.

Nichols said he was first attracted to alternative fuel vehicles by the volatility of fuel prices and instability in oil-producing regions. He said his Chevy Volt provides feedback on driving efficiency.

“It makes you aware of your bad driving habits, such as quick acceleration and quick stops. I find myself adjusting my driving to maximize electric range, such as coasting, which captures energy and puts it back into the battery. It really brings to light everything that affects the efficiency of any vehicle and why it varies so greatly,” he said.

Nichols’ 14-year-old daughter, Shelbey, who will be learning to drive soon, said she likes electric cars because of the impact on the environment.

Rob Gregoire of Mangold Ford predicts an increased interest in electric cars based on environmental factors in the future.

“I think that will become more prevalent as the millennials come of age,” Gregoire said. “There’s a whole generation of young people being raised to think about being more green.”

Sales of electric cars were low in the United States in 2015, according to www.insideevs.com, a website that tracks sales, but Nichols said he’s seeing more EVs on the road in Peoria.

“The most common ones I see are the Volt, Leaf, Tesla Model S and the Mitsubishi I-MiEV (which has been discontinued),” he said.

“I still get questions quite often when I plug in my car, even after four years. There’s still a great percentage of the general public that doesn’t understand EVs,” Nichols added. “I regularly see the parking spots for the chargers blocked by a non-electric car. I would assume some do it on accident and some on purpose. People with an all-electric car may be depending on that charge to get to their next destination. It’s no different than parking an electric vehicle at a gas station and blocking the pump.”