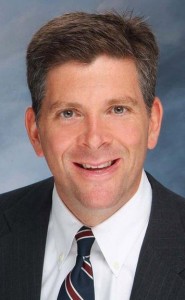 Running in a largely Republican district, LaHood is the likely favorite in to win a special election to fill out the remainder of Schock’s term, which runs until January 2017.

Darin LaHood is one step away from following in his father’s footsteps.

LaHood, 42, handily won the Republican nomination to represent the 18th District in Congress last week, topping a three-candidate field in a special primary called after the resignation of former Rep. Aaron Schock.

Running in a largely Republican district, LaHood is the likely favorite in to win a special election to fill out the remainder of Schock’s term, which runs until January 2017.

LaHood will face Democrat Rob Mellon in a Sept. 10 election.

Attempts by the Chronicle to reach LaHood and Mellon or representatives to discuss the election were unsuccessful. But both have discussed their priorities in social media and the platforms.

“I’m going to run on my record in the state senate,” said LaHood, currently an Illinois state senator representing a 37th district campaign in a video earlier this year. “I’ve been there five years and I have a very conservative record on both social and fiscal issues. I spent 10 years prior to that as a state and federal prosecutor.”

His father, Ray LaHood, represented the central Illinois region in Congress for seven terms between 1995-2009.

Darin LaHood, who collected 69 percent of the vote, carried all 19 counties to top the three-candidate field in last week’s low-turnout primary that attracted just over 45,000 Republican voters.

He easily outdistanced runner-up Mike Flynn, a conservative writer and blogger who had 28 percent. Donald Rients trailed with 2.7 percent of the vote.

LaHood had the backing of top area Republicans, plus major endorsements and a considerable campaign fundraising advantage.

The advantage will likely continue in the race against Mellon. Primary fundraising reports for him were not readily available last week.

Mellon outlined several themes — including “shared prosperity” to ensure all Americans can rise to accomplish their dreams.

He pledged on his website (robmellon.com) to “work to ensure the political and economic systems work for the American people, by expanding the middle class, building a more secure economy, and raising the standard of living of the average American.”

But Mellon faces an uphill battle in a congressional district that heavily favors Republicans.

While boundaries have changed over the years, the central Illinois region now encompassing the 18th Congressional District has not sent a Democrat to Congress since the late 1930s.

The September winner would succeed Schock, once a rising Republican star who resigned from Congress after allegations he failed to report receipt of gifts as well as possible abuse of campaign and congressional funds for travel, entertainment and office decorations, including a “Downton Abbey” theme in his congressional office.