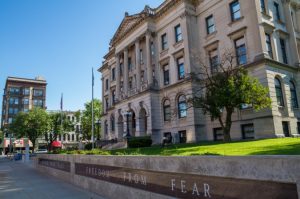 The McLean County Museum of History is resuming its Lunch and Learn series this month on the second Thursday of each month. (Photo courtesy of visitbn.org)

Gov. Bruce Rauner paid a visit to Bloomington and Normal on Tuesday, Oct. 2, and spoke of a new program aimed at curbing the still-rising number of overdoses linked to opioids and other highly addictive drugs.

During his visit, Rauner unveiled a program that will give Bloomington and Normal residents an opportunity to discard unwanted prescriptions and over-the-counter medications in a safe, convenient manner.

As part of the new effort, medication disposal kiosks will be installed in various areas of the two communities. There is no charge to use the kiosks. The first one is in operation at Walgreens, 1525 N. Veterans Pkwy., Bloomington, and more are expected to follow, Rauner said in his remarks.

The McLean County Museum of History is resuming its Lunch and Learn series this month. Each installment, taking place from 12:10 to 12:40 p.m. the second Thursday of each month, will delve into a different historical topic.

Steve Vogel heads up this month’s Lunch and Learn program. He will speak on, “The Hendricks Case: 35 years Later.” Upcoming sessions include a talk on the Ewing Manor in November and Christmas traditions in December. Lunch and Learn sessions are held at the museum, 200 N. Main St., Bloomington.

Bloomington Police are investigating an incident involving shots being fired in the 1900 block of Tracy Drive. According to a department report, dispatchers took multiple calls of gunshot sounds about 7:30 p.m. Sunday, Sept. 30.

No injuries or damage were reported. Upon arrival, officers canvassed the area and located numerous spent shell casings. According to callers, the gunshot sounds began after an argument in a nearby apartment complex. Several eyewitnesses reportedly told police they observed multiple persons flee the site in vehicles and on foot after the gunshots were heard. BPD officials are asking anyone with information to call 309-434-2579.

A 51-year-old Moline man is recovering from injuries sustained when the moped he was riding collided with a car. The incident occurred on U.S. Highway 51, south of Bloomington, about 7:12 p.m. Monday, Oct. 1.

According to information from Illinois State Police, the driver of the car, a 19-year-old Oakley man changed lanes and, in the process, rear-ended the moped driver.

The incident, according to ISP officials, occurred about 3 miles south of Interstate 74, south of Bloomington’s city limits. The man was flown to OSF HealthCare Saint Francis Medical Center in Peoria. At press deadline, he remained in stable condition.

The city of Bloomington has hired an attorney to conduct an independent review against Nikita Richards, who is running on the Democrat ticket in next month’s McLean County clerk’s race. Richards, who works for the city as human resource coordinator, has been accused in an ethics complaint of engaging in political work and partaking in other activities — such as shopping — while on the clock for the city.

City of Bloomington officials are putting a spotlight on an exercise within municipal government that oftentimes is overlooked by the general public.

Throughout October, which is considered National Community Planning Month, city officials will host activities around the recognition.

Mayor Tari Renner recently hosted an official proclamation in honor of the month and its significance. City staffers also plan to host a booth on Saturday, Oct. 20, at the Downtown Bloomington Farmers Market.

Each year, a different theme is incorporated into National Community Planning Month. This year’s is, “housing as community infrastructure.” In a statement, City Planner Katie Simpson said, “I’m excited that the city is recognizing the importance of National Community Planning Month, and I hope it brings attention to the hard work of everyone that participates in planning.”

Sites earmarked for development to be parking lots

A pair of parcels along Main Street in Normal will be used for parking lots into the foreseeable future, City Manager Pam Reece announced recently to the Town Council.

The properties, near the Illinois State University campus, have been envisioned for future development, but Reece in her recent report said the efforts have been stalled for the time being.

The high-profile lots are in a highly visible area, Reece said, and will likely be put to good use because parking is in short supply in the area.