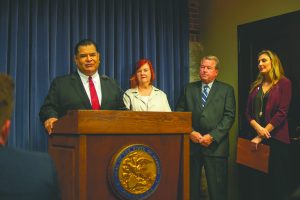 Democratic state Sen. Martin Sandoval, of Chicago, is joined by Republican state Rep. Margo McDermed, of Mokena, and Republican state Sen. Don DeWitte, of St. Charles, at a news conference Wednesday in Springfield advocating for greater infrastructure spending on roads and bridges. The lawmakers were joined by the Illinois Chamber of Commerce at the press event detailing a new study on the cost of infrastructure inaction. (Photo by Jerry Nowicki/Capitol News Illinois)

SPRINGFIELD — A new report says subpar roads in Illinois are costing drivers $1,300 to $2,600 in repair, safety and congestion costs annually, and that number will increase if the state does not take action on an infrastructure bill this legislative session.

Unveiling the report Wednesday, May 15 at the Capitol, representatives of the Illinois Chamber of Commerce joined one Democrat and two Republican lawmakers who said they are ready to take the lead on an infrastructure bill, and all sources of revenue — including hikes to the motor fuel tax and vehicle registration fees — are on the table.

“You can’t build 21st century infrastructure with 1990s money. There isn’t enough efficiency, there isn’t enough reform, you just can’t do it,” said Republican Rep. Margo McDermed, of Mokena. “We still need to look at the fact that our buying power has plummeted because cars are much more efficient and we don’t get as much money in, number one. And number two, inflation. We haven’t raised that (gas tax) number since 1990.”

“The real question we have to ask is, ‘What is the cost if we do nothing?’” DeWitte said. “[The report] is more evidence that the longer we wait, not only do things get worse, but the more expensive it becomes.”

The report estimates drivers in Illinois face $18.3 billion in annual vehicle costs as a result of rough roads, traffic crashes, and lost time and wasted fuel caused by congestion.

In Springfield, that boils down to about $1,300 per person annually. In the Chicago area, it amounts to about $2,600 each year.

Sandoval, who chairs the Senate committee that has been touring the state to hear from local officials about infrastructure needs, is sponsoring legislation to raise the state’s gas tax by up to 25 cents while hiking vehicle registration fees. He said his proposal, which would raise $2.4 billion in revenue, is a launching point for discussions on a capital bill.

“I think it’s a hypocrisy on behalf of our state to consider ourselves to be the crossroads and hub of America when we don’t necessarily take a real public and personal interest in upkeeping our infrastructure. We’ve fallen behind for far too long,” Sandoval said.

Sandoval did not give specifics on what measures, if any, lawmakers were considering to drive down labor or project costs rather than upping taxes and fees, though he said they would be included in a final bill.

McDermed said her Will County district is in dire need of infrastructure improvements. Specifically, she said a twin bridge on Interstate 80, which is one of the worst-rated in the state, has caused her constituents to alter their traffic patterns.

“People in my district are telling me they take the side streets to get where they’re going,” McDermed said. “They don’t take the bridge anymore. … This is unacceptable.”

The lawmakers acknowledged increasing fees or the gas tax will be a difficult sell for some of their colleagues, but “literally every number is on the table, because every member is having input into this process,” DeWitte said.

McDermed said a 2016 constitutional amendment which mandates the use of gas tax and licensing fee dollars for transportation infrastructure and safety use will ensure new revenues are not diverted from road and bridge projects.

The Chamber is supportive of a measure that would raise the gas tax while phasing out a state sales tax on motor fuel, which is not guaranteed to go to roads. Sandoval, however, said that would phase about $600 million out of the state’s general revenue fund that would need to be made up elsewhere.