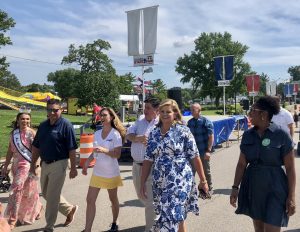 SPRINGFIELD – The 2022 Illinois State Fair officially got underway Thursday, Aug. 11 when Gov. J.B. Pritzker and Secretary of State Jesse White cut the ceremonial ribbon in front of the main entrance to the fairgrounds.

“As many of you know, the Illinois State Fair, one of my favorite events of the year – and First Lady MK Pritzker and I could not be happier than when we come to the State Fair,” Pritzker said at the ceremony.

The first State Fair opened in Springfield in 1853. It then moved to several different cities before settling at its permanent location on Springfield’s north side in 1894. It has been held there every year since then, except for the years during World War II when the fairgrounds were used as a supply base for the Army Air Force. There also was no fair in 2020 due to the COVID-19 pandemic.

The grounds are now undergoing major renovations with an infusion of $58.1 million from the Rebuild Illinois capital improvements program. Those include the repaving of several roads on the grounds, and major renovation to the coliseum and multi-purpose arena.

This year’s fair is also a special occasion for Secretary of State White, who is retiring in January after serving a record 24 years in that office. He served as the grand marshal of the twilight parade that took place Thursday evening.

The fair will run for the next 10 days, concluding Sunday, Aug. 21.