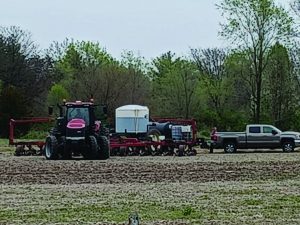 Farmers were anxious to get into their fields last week after poor weather kept machinery idle for most of April. A Mossville (Peoria County) farmer is pictured preparing for fieldwork on Friday, April 29. (Photo by Tim Alexander)

Farmers are breathing a sigh of relief now that planting has started in earnest throughout most of Illinois, with many taking to their fields last week. We also have a report on the huge increase in the Farm Index for most commodities over the past year, and a look at the impacts of late planting. For this and other news of note for farmers and rural dwellers, please read on …

There were only an average 1½ days suitable for field work across Illinois during the week ending April 24, according to USDA-NASS’ Illinois Crop Progress and Condition report. By the middle of the following week, however, this reporter had observed dozens of tractors moving planters in and out of farm fields across Peoria, Tazewell and Woodford counties. In Peoria County, farm bureau manager Patrick Kirchhofer told news media that he estimates 15-20 percent of both corn and soybean crops had been planted in central Illinois during the week.

Speaking to the Illinois Farm Bureau news service, Illinois State Climatologist Trent Ford offered an outlook for the rest of the planting season. “The outlook for May is looking near normal for precipitation, which will give folks a chance to get in the field,” said Ford. “Temperatures are leaning toward likely below normal. But, for May, that’s still warm enough to get field activity done, which is important. There will be delays in some fields, but I’m not concerned about widespread delays nearly like what we saw in 2019.”

The value of milk in Illinois has also increased from $17/cwt. in March 2020 to $25.80 in March of this year, while rising from $17.30 nationally to $25.90. Other commodities that have experienced significant price jumps across the nation include hay, alfalfa, oats, sorghum, wheat, calves, beef cattle, cows, steers and heifers, and hogs, according to the report.

BLOOMINGTON — After Illinois Gov. J.B. Pritzker has signed legislation incentivizing use of higher biodiesel blends, Andrew Larson with the Illinois Soybean Association did an interview with Brownfield in which he said the bill has been a cornerstone initiative of the ISA for the past few years. “We were successful in getting legislation passed and signed this week by the governor to extend the state sales tax exemption on biodiesel blends of 10 percent and higher for the next few years,” he said.

The legislation extends the current B10 sales tax exemption until 2023 and then allows an increase in the blend level subject to the tax exemption to B13 in 2024, B15 in 2025 and B19 in 2026. Larson said the soybean association was also successful in getting the exemption extended for a longer period, with the new law valid through 2030.

“Which is a huge win because based on the law that existed before this week, by 2024 there would have been no biodiesel support in state policy. So, it is a huge win and provides certainty for the industry,” Larson said.

Negotiations surrounding the bill, which was co-sponsored by Sen. Patrick Joyce, D-Essex, were led by the ISA. “Illinois is the largest soybean-growing state in the U.S. Going to higher blends will increase demand for this byproduct,” Joyce said. “It’s a good source of fuel. It’s good for Illinois, and it will help the state economy.”

A recent study found that in Chicago, switching to B100 would decrease diesel particular matter-related cancer risks by up to nearly 1,600 cases. (Illinois Soybean Association/Clean Fuel Alliance)