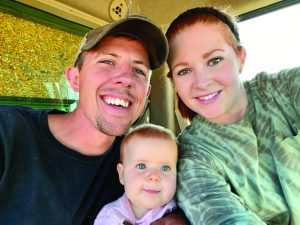 Southern Illinois farmer Elliott Uphoff takes a break from a recent harvest to spend a moment with his wife, Hailey, and daughter, Madeline. (Photo courtesy of the Uphoff family)

With a string of favorable weather, harvest is wrapping up in Illinois; we have the latest statistics. Also in farm and rural news this week: the Illinois Farm Bureau and others in agriculture are celebrating the defeat of the Illinois “fair tax” at the polls Nov. 3, and we have the latest report from COUNTRY Financial’s crop claims from recent wind-aided field fires across central Illinois. For this and more, please read on …

SPRINGFIELD — With 4.5 days suitable for fieldwork during the week ending Nov. 1, corn harvested for grain was 89 percent complete in Illinois. This is according to the Nov. 2 USDA-NASS Illinois Crop Progress and Condition report, which estimated the state soybean harvest at 93 percent. These numbers are ahead of the five-year harvest average of 83 percent complete for corn and 88 percent complete for soybeans.

In southern Illinois, Shelbyville farmer Elliott Uphoff reported that his corn and soybean harvests had been complete for a couple of weeks. “We are looking at a little bit below our trend line for both corn and soybeans, but overall it is a very good harvest,” the Illinois Soybean Association district manager said during a phone call.

BLOOMINGTON – The Illinois Farm Bureau is claiming victory in its heavily funded campaign to deny a ballot amendment that would have put a new income tax structure into place in the state. On Nov. 3, 55 percent of Illinoisans voted “no” to the “Fair Tax” amendment that would have imposed a graduated, income-based tax structure on those earning more than $250,000 per year.

“We started this campaign almost two years ago, when the General Assembly first introduced the joint resolution to put it on the ballot,” said Kevin Semlow, IFB director of state legislative affairs, during an RFD Radio interview on Nov. 5. “We opposed that based off of policy … and we just kept pushing through that, keeping it focused.”

Though the IFB was just one part of a coalition that campaigned against the amendment, its members deserve credit for helping defeat the bill, according to IFB President Richard Guebert, Jr. “This is probably one of the strongest, most effective grassroots campaigns I’ve ever seen. I take my hat off to our members, our county Farm Bureaus and the leadership. They did a magnificent job running this campaign out in the countryside,” said Guebert.

BLOOMINGTON — Farmers know that weatherwise, October ran both hot and cold in Illinois. At times it was also incredibly windy at times, with hot and gusty conditions sparking an unusually high amount of crop field fires, particularly across central Illinois. We had promised you an update on these fires several weeks ago, and one was provided last week by COUNTRY Financial media relations director Chris Coplan.

There was no information as to how much money COUNTRY will be paying out in claims in relation to the fires, but this column will try to share that information in coming weeks.

ANKENY, Iowa — One week after five locks and dams on the Illinois River reopened to barge traffic, over 73 billion bushels — or more than 2 million metric tons — of U.S. soybeans were exported via the inland waterway system, the USDA reported. This is partly due to the Illinois River being operational for barge traffic of soybeans, grains and other agricultural commodities, notes Mike Steenhoek, executive director of the Soy Transportation Coalition (STC), of which the Illinois Soybean Association claims membership.

“Given the significant volume of soybean and grain exports, it is essential to have each link in the supply chain operating without impediment or complication,” said Steenhoek, who heaped praise on the U.S. Army Corps of Engineers — Rock Island District for coordinating and completing the renovations in time for delivery of harvest crops.

“It did not require a professional engineer to be able to diagnose that it was not a matter of “if” there would be future mechanical failures at some of these lock and dam sites. It is more a matter of “when” they would occur. The crumbling concrete and widespread rust at a number of these sites — particularly LaGrange Lock and Dam — were evident to even a casual observer. Agriculture, the barge industry, and other stakeholders have been advocating for this work for a number of years and are pleased it has finally concluded.”

According to the U.S. Army Corps of Engineers’ Waterborne Commerce Statistics Center, the Illinois Waterway annually accommodates more than 40 million short tons of freight. The commodity breakdown is as follows: