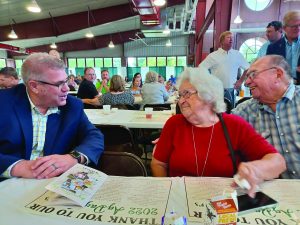 Republican gubernatorial candidate Darren Bailey (left) chats with farmers Don and Trena Bennett of Wayne County during the Illinois State Fair Ag Breakfast on Tuesday, Aug. 16. The Bennetts attended the breakfast because their farm operation was recognized as a “centennial farm” by Ag Director Jerry Costello. (Photo by Tim Alexander)

This week’s column offers a bushel basket of news from Agriculture Day, Tuesday, August 16, at the Illinois State Fair. The day began at 8:30 am with the annual Ag Breakfast in the Orr Building on the Fairgrounds …

SPRINGFIELD — Gov. J.B. Pritzker, Lt. Gov. Juliana Stratton, U.S. Sen. Dick Durbin and other high-ranking Illinois lawmakers and office holders joined dozens of blue-clad FFA youth and hundreds of others from the Illinois agriculture community for the annual Illinois State Fair “Ag Breakfast,” held on Agriculture Day, Aug. 16 in the Orr Building. Also present but not participating were Republican gubernatorial challenger Darren and Cindy Bailey, who had breakfast with farmers and others at a table near the dais where Pritzker, Stratton, Illinois Dept. of Agriculture Director Jerry Costello and others delivered remarks.

Pritzker used the occasion to announce that the state of Illinois would assume the membership costs of any public high school student who wanted to join their school’s FFA program, sparking a loud cheer from the FFA members in attendance. “The future of our agriculture industry is vital to our state’s success and future growth,” said the governor. “That’s why we’re making agricultural education more accessible across Illinois. FFA is foundational to that effort; every student regardless of economic status deserves access to what FFA has to offer, in and outside the classroom.

“But previously, only two-thirds of agricultural students were able to experience FFA, meaning that 15,000 students in Illinois didn’t have access to it. That’s a missed opportunity for our students, but also for our state. So, from now on, the state of Illinois will pay FFA membership dues for every single student.”

According to the IDOA, by assuming membership fees for all FFA programs Illinois becomes an “affiliation” FFA membership state. The money for membership fees is made possible through a $550,000 appropriation in the state budget approved by the Illinois General Assembly.

Also during the Ag Day Breakfast, IDOA Director Jerry Costello recognized by name and county six families with bicentennial farms, 83 families with sesquicentennial farms and 98 families with centennial farms. “These generations of farmers have been waking up at the crack of dawn to ensure families across the nation won’t go hungry and that America remains an agricultural leader,” he said. “To all of you, thank you so much for your commitment to our state’s success.”

SPRINGFIELD — Once again, Illinois First Lady M.K. Pritzker outbid her husband, Gov. J.B. Pritzker, to claim the Grand Champion Steer at the Governor’s Sale of Champions with a bid of $105,000, tying the record she set in 2021. The champion steer was shown by Ashtin Guyer of Scott County.

SPRINGFIELD — Also on Ag Day at the fair, top youth livestock exhibitors represented their respective counties in the Master Showmanship Contest, coordinated by the Illinois Farm Bureau. Carter Hoge of McDonough County took top honors as the overall grand champion. Hoge is the son of Mark and Katie Hoge. Overall reserve grand champion was awarded to Taylor Crouch, Maroa, Macon County. Crouch is the daughter of Cassie and Jeremy Crouch. Congratulations to all the young exhibitors at the Illinois State Fair for a job well done!

The state fair’s “Grand Champion Overall Master Showman” contest invites 4-H members ages 14-18 years to display their showmanship skills across three species — beef, sheep and swine. The 4-Hers are judged on their ability to handle each animal, knowledge of the species and animal husbandry, as well as overall showmanship skills. (Illinois Farm Bureau)