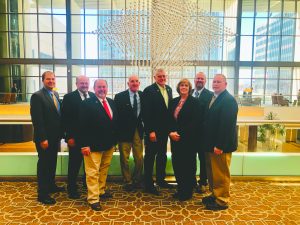 While extending thoughts and prayers to families whose health has been affected by Covid-19, better known as the novel coronavirus, this week’s column is dominated by news of the impact of the illness on the farm community. Please read on for a cross-section of reactions from the Illinois agriculture industry …

BLOOMINGTON — A popular post being bandied about Facebook right now boasts that agriculture is just about the only Illinois industry not shutting down due to the coronavirus menace. While partially true, the statement doesn’t scratch the surface of the actual impacts wrought on farmers’ bottom lines by Covid-19’s increasing presence in the U.S.

“These are unprecedented times in our world,” noted Illinois Farm Bureau President Richard Guebert, Jr., in a statement to members issued March 13. “Efforts to limit the spread of the coronavirus has disrupted our way of life. Downturns in the commodity and financial markets have dealt major blows to the balance sheets of our farmers and members.”

Guebert had just returned from an American Farm Bureau Federation Board meeting where members agreed to actively communicate to state and federal officials the need for farmers to be able to access capital. Farm Bureau also is advocating for packing plants, milk processing facilities and ports to be declared essential services and remain in operation, along with continued operation of the handling and supply system farmers rely on to operate.

The IFB president also spoke out to the importance of farmers not being afraid to reach out for emotional help, and have established a mental health resources tab at www.ilfb.org.

In Washington, D.C. U.S Agriculture Secretary Sonny Perdue underscored the seriousness of the situation, while praising the Trump administration for its declaration of a national emergency in response to the Covid-19 outbreak. “As a nation, we must remain vigilant, pull together, put any kind of partisanship aside, and do what needs to be done for the American people,” Perdue stated.

In Peoria, the county farm bureau decided to scrap its 20th annual Farmer’s Share of the Food Dollar breakfast, which normally attracts upwards of 1,500 patrons — many of them elderly — less than 24 hours before its scheduled start time of 7 a.m. on March 14. Peoria County Farm Bureau Manager Patrick Kirchhofer said in an email that the majority of the membership was upset at the media for overblowing the coronavirus threat.

“As a general rule, I would say the farm community feels the media attention the coronavirus has received has been overboard,” said Kirchhofer, adding “The measures being taken seem to be a bit drastic.”

By March 10, the novel coronavirus had done its damage to the market, driving the Dow and crude oil — along with ag markets — down by over 2,000 points. Soybeans finished off over 20 cents on the May contract, and U.S. crude was down over $10, finishing at $31.13 per barrel, MidCountry Media and Hoosier Ag Today reported.

The March 10 USDA World Agricultural Supply and Demand Estimates (WASDE) didn’t provide support for soybean growers, either. Ending stocks remained at 425 million bushels, while the U.S. season-average soybean price was projected at $8.70 per bushel, down five cents, and soybean oil was down two cents. Though soybean crush saw a record total for the month of January, the current focus, according to University of Illinois agricultural economist Todd Hubbs, is squarely on the impacts of Covid-19 as the disease progresses.

“The recent strength in crush led many market observers to raise the prospect for soybean crush totals,” Hubbs stated in a U of I Department of ACES article, “The Pace of Soybean Use.” “The implementation of higher export taxes on soybean products in Argentina helped to bolster this narrative. While soybean crush may see an increase in marketing-year use, the prospect of coronavirus issues hurting meat demand may limit the upside potential later in 2020.”

During the meeting, Borgic was presented with a plaque to signify his contributions to the NPPC board, which the Raymond, Illinois pig farmer retired from. Another Illinois producer, Zehr, of Washington, was elected to the NPPC nominating committee. (IPPA news)

“Brendan is passionate about what he does and has a clear understanding of soybean best management practices,” said Rich DeSchepper, seed and technology manager with West Central FS and Marshall’s employer. “He makes the best and most applicable soybean recommendations for his growers to help them protect and enable consistent high-yielding genetics, while being mindful of environmental situations and conservation.”