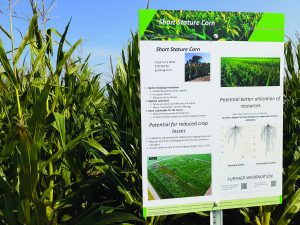 Short stature corn is being grown at the Bayer Crop Science Roanoke, Illinois FOCUS site. The variety is being readied for an expected 2023 commercial release. (Photo by Tim Alexander)

Corn condition continues to spiral downward in the U.S. and here in Illinois, following a 2 percentage point drop in mid-August. Also: Illinois Master Farmers were honored this week at the Farm Progress Show, and the “future of corn” was showcased at Bayer Crop Science’s 2021 Roanoke FOCUS Tour on Aug. 26-27. For this and more farm and rural news, please read on …

SPRINGFIELD — Corn rated as “excellent” in the state of Illinois slid from 29 percent on Aug. 15 to just 17 percent on Aug. 22, while soybeans in excellent condition fell to 20 percent from 29 percent the prior week, according to the latest Illinois Crop Progress and Condition report issued by the United States Department of Agriculture. Combining corn and soybeans, Illinois’ overall crop condition fell by 7 percentage points. The decline was the largest in the nation, followed by Wisconsin, which saw a 5 percent average decline. The decline in crop quality appears to be weather related; both topsoil and subsoil moisture supplies were rated just 56 percent adequate and eight percent surplus in Illinois last week.

DTN lead analyst Todd Hultman reported last week that U.S. corn and soybean conditions are tied for the third-lowest good-to-excellent rating in the past dozen years.

Short stature corn, which grows to a height of 6-8 feet rather than 8-10 feet tall, is being readied for commercial release as soon as 2023, according to Bayer crop adviser David Shenaut. It’s agronomic advantages include easier fungicide and pesticide applications, along with the option for narrower row spacing in order to increase yield per acre. The variety will initially be offered for commercial corn, though food-grade short stature corn should be coming through the Bayer pipeline in the near future, Shenaut said.

Another interesting new product is Bayer’s Smart Stax Pro, which can be utilized as part of a revolutionary three-mode action system for better control of corn rootworm, which Bayer crop technician Jim Donnelly of Walnut, Illinois described as the top field pest in Illinois cornfields. Smart Stax Pro will be available for the 2022 growing season.

After the tour, attendees were treated to a ribeye sandwich luncheon at the Bachman Farm outside Roanoke and learned more about the Bayer product pipeline and recent adjustments to the Climate Corporation’s Field View software.

U of I: Short stature corn is for real

URBANA — Short stature corn was also in the spotlight during the University of Illinois Department of Crop Sciences Agronomy Day on Aug. 25.

According to Eric Winans, a crop science doctoral student, one of the shorter plant’s advantages is standability. Winans reported researchers found less crop loss and less lodging with shorter plants. In an image of corn plots hit by last year’s derecho storm, the shorter corn remained standing, he pointed out.

Winans agrees with David Stenaud of Bayer that there is an opportunity to increase plant populations with short-stature corn. “You can plant into the low 40s,” he said.

Winans also pointed out that short-stature corn has a very long root system, which increases the amount of weight plants can hold. “With a deeper root system, the (short-stature) plants are able to handle the higher density,” Winans said. (Ill. Farm Bureau news)

DECATUR — Kent Hodel of Metamora, Kenneth Hartman of Waterloo and Paul Taylor of Esmond are being introduced this week as Prairie Farmer’s 2021 Master Farmers during the Farm Progress Show, which runs from Aug. 31-Sept. 2. The designation, sponsored by GROWMARK and FS, was introduced in 1926 when cooperatives began organizing across the state of Illinois. The three winning Illinois farmers are GROWMARK-FS System customers.

“Prairie Farmer is grateful to GROWMARK for its continued financial support of the Master Farmer awards,” said Holly Spangler, senior editor of Prairie Farmer. “Since 2009, GROWMARK has provided the financial assistance necessary to continue the program.”

Master Farmers are selected in Illinois, Iowa, Wisconsin and northeast Atlantic states for their actions and beliefs, both on and off the farm, that honor the heritage and history of U.S. agriculture, noted Jim Spradlin, GROWMARK CEO. “It’s an honor to sponsor this prestigious award,” he said. “Individuals recognized as Master Farmers embody the qualities and competencies of this noble profession we are so proud to serve.”

Hodel, Hartman and Taylor will be honored at the 2021 FPS during an awards ceremony. Look for reports from the show, which makes its return after being cancelled due to COVID in 2020, in this column space next week.

URBANA — AgriAbility and the Illinois Farm Bureau are hosting a Sept. 9 webinar to offer important considerations for safety and health during the upcoming harvest. The noontime webinar, “Tips From the Field for a Safe Harvest,” will be hosted by Josie Rudolphi, farm safety specialist for the University of Illinois Extension. Free registration for the webinar is online at go.illinois.edu/AgrAbilityFall21. For more information, contact Rudolphi at josier@illinois.edu.

Bayer Crop Science’s Roanoke FOCUS site is one of more than 50 agronomic research sites located across the U.S. where trials are grown in conditions typical of grower fields in the area.