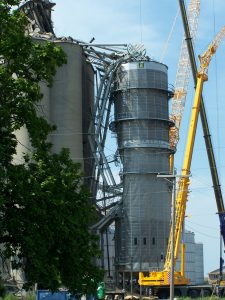 Work is continuing on rebuilding the Grainland Cooperative grain elevator that was destroyed in an August explosion. Jeff Brooks, Grainland general manager, said the elevator located on County Highway 3 west of Eureka in Woodford County will be fully operational by the 2019 harvest. (Tim Alexander photo)

This week we have an update on repairs to a Eureka grain cooperative badly damaged by an explosion in August, along with a winter weather outlook and more useful news for Illinois farmers and rural dwellers. Please plow on …

EUREKA — Grainland Cooperative in Eureka will be fully operational by harvest of 2019, according to general manager Jeff Brooks. The Woodford County facility was heavily damaged in an early August explosion of unknown origin, but has been accepting grain on a limited basis during the current harvest. No one was present at the co-op when the early morning blast occurred.

“The explosion destroyed our main house and that has been totally demolished. Our annex was salvageable, so we are in the process of getting it repaired, so it is going to stay. We had a construction project in place that we were going to do this summer anyway, putting some new dump pits in and things of that nature, so we are proceeding with that,” Brooks said last week.

Dirt is currently being cleared for foundation work to replace the old, concrete main storage house, which blew out on its east side but did not crumble. “This is not something that will happen overnight,” Brooks continued. “It’ll be a year-long process and our goal is to be ready to go by September first of next year.”

So far, the facility has been able to accept all of the grain farmers have brought in from the current harvest. “We were a little late in being able to get started to accept all that corn and get our dryer running, but of course Mother Nature helped take care of that by drying the corn down pretty good in September for us. We had a few days where we had some lines and it was a little slow getting through, but for the most part we’ve moved it along quite well,” said Brooks.

BLOOMINGTON — The Illinois Farm Bureau joined with more than 60 livestock organizations to call for changes to the hours of service regulations to which a commercial truck operator must adhere. Current rules limit driving time to 11 hours per day, with a 14-hour on-duty limit. Groups including the National Cattlemen’s Beef Association and Livestock Marketing Association are calling for an increase to 15 hours of driving time and 16-hour shifts.
“We are concerned that the 11- and 14-hour rules were not drafted with livestock haulers in mind and thus do not accommodate the unique character of their loads and the nature of their trips,” the groups stated in a petition filed to the U.S. Department of Transportation and the Federal Motor Carrier Safety Association. Saying the current regulations “place the well-being of livestock at risk during transport and impose significant burdens on livestock haulers, particularly in rural communities across the country.”

Pointing to what they call the livestock industry’s strong road safety record, the groups are recommending regulations that allow each hauler to use their professional judgment to determine when to take their breaks. “When livestock and other live animals are transported, it’s important to get them to their destination safely and without delay or disruption,” said Zippy Duvall, president of the American Farm Bureau Federation. “Safety for the driver and others on the road is a priority. That is why we are petitioning DOT to adopt modern fatigue-management practices that provide the same or greater level of safety while avoiding unintended and unnecessary stress on the animals entrusted to our care.”

URBANA — The official NOAA forecast indicates a weak El Niño event has a 70 to 75 percent chance of settling over Illinois this winter, according to the Illinois Water Survey at the University of Illinois. “If it had been stronger, the odds of a warmer-than-normal winter would be higher for us,” said Jim Angel, Illinois state climatologist. “A weaker El Niño event could mean that other factors have a chance to play a bigger role in our winter weather. However, things like Arctic oscillation and the related polar vortex are much harder to predict more than a few days in advance.”

Overall, the official NOAA outlook indicates the northern third of the state has a slightly increased chance of a warmer-than-normal winter, while the remainder of the state has an even chance of above, below and near-average winter temperatures and precipitation. “Not much to report for Illinois,” Angel said in his weekly weather blog from the Prairie Research Institute.

Livestock haulers accounted for 6.6 percent of all commercial drivers from 2013 to 2015, but less than 1 percent of crashes involving large trucks. (Federal Motor Carrier Safety Admin.)

ASSUMPTION — Around 20 Macon County farmers joined together last week to thank Congressman Rodney Davis (R-17th) for his work on behalf of the agriculture industry. Assumption farmer Len Corzine called the gathering “a chance to publicly thank the congressman for the work he’s done. He’s really put things in motion concerning core farmer issues like crop insurance, E15, and infrastructure, including the funding for the LaGrange lock and dam.”
Davis, a three-term member of the House Committee on Agriculture, has been credited for helping to craft the 2014 Farm Bill, which helped many Illinois farmers continue to insure their crops rather than seek disaster assistance payments from the government. (Illinois Corn news)

GOREVILLE — Three Illinois premier high school FFA chapters are in Indianapolis this week competing for top honors in four prestigious FFA national finalist awards. Located in far southern Illinois, Goreville FFA is among the top 10 nominees for 2018 group projects in the “Growing Leaders” and “Building Communities” areas, and is also a “Model of Excellence” national finalist.

“For our Building Communities project, we interviewed 20 area veterans and compiled their stories and photos into a book that we had published,” said Goreville FFA adviser Jeff Robinson. “For Growing Leaders, we launched a ‘Screen Free For a Better Me’ campaign.”