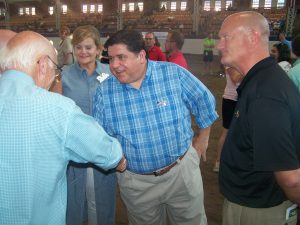 Illinois Gov. J.B.Pritzker announced last week that $58 million in upgrades had begun on the Illinois State Fairgrounds, including to the Coliseum, where Pritzker was photographed in 2020 with wife Mary Kathryn Pritzker following the annual Governor’s Sale of Champions. (Photo by Tim Alexander/for Chronicle Media)

The Illinois Capital Development Board announced last week that $58.1 million in upgrades to the State Fairgrounds were underway. Also in the news: Illinois corn acreage is down in 2022 while soybean acreage is up, according to the new USDA acreage report. We also have news on the passage of a state bill that makes it easier for schools to buy food from local producers.

SPRINGFIELD – For many years, much-needed overhauls to the Illinois State Fairgrounds were deferred over budget restraints. That changed after the administration of Gov. J.B. Protzker restored fair upgrade money to a line item in the state’s budget. In 2019, Phase 1 of a massive fairgrounds overhaul began with the Coliseum renovation project, which addressed various structural problems associated with the 122-year-old facility.

Last week, the governor’s office announced that Phase 2 of the fairgrounds overhaul had commenced, including road projects, new roofs and structural repairs on prominent buildings overseen by the Capital Development Board (CDB). The cost of Phase 2 upgrades: $58.1 million, according to CDB executive director Jim Underwood.

“The Illinois State Fairgrounds are a haven for residents and families across our state to enjoy nature, camping, entertainment, and more,” Underwood said, in an Illinois eNews release. “CDB is looking forward to overseeing these deferred maintenance projects, which are critical for keeping buildings sustainable and accessible to all.”

Other upgrades include $8.6 million to restore and renovate the Multi-Purpose Arena, home to the IHSA State Rodeo Championship. Improvements are being made to sidewalks, walls, steps, and expansion joints, electrical systems, the tension structure, canopy, and retaining walls. The facility will be unavailable for use during the 2022 fair. In addition, the Department of Agriculture kicked off a $4.1 million road construction project to improve the conditions of the roads commonly used by non-fair event patrons and state fair agriculture exhibitors.

SPRINGFIELD – Legislation that makes it easier for school districts to purchase fresh, locally grown food by eliminating the “lowest bidder” requirement was signed into law last week by Gov. J.B. Pritzker. The Better School Lunches Act (HB 4813) was supported by a number of Illinois school districts and grower’s groups, along with the Illinois Stewardship Alliance.

“For too long, our laws have locked school districts in a race to the bottom for ‘lowest bidder full service’ contracts that have disproportionately hurt low-income and minority students. I am thankful for the years of advocacy from parents, students and school officials who made today a reality because they wanted to create healthier outcomes for our children,” said State Rep. Jehan Gordon-Booth (D-Peoria).

Jeff Hake, a farmer at Funks Grove Heritage Fruits & Grains and founding member of FarmFED Cooperative noted: “The Better School Lunches Act represents an opportunity for farmers not only to greatly expand their market opportunities and grow their businesses, but to fulfill a mission. Farms like ours are invested in feeding our communities, and this legislation goes a long way to enabling us to feed our youngest generation the freshest, most nutritious food possible.”

Under House Bill 4813, food service providers that participate in any of the USDA’s child nutrition programs are exempt from contract bidding requirements, allowing school districts to give preference to contracts that promote the health and well-being of students while sourcing local food products.

SPRINGFIELD – As predicted, planted corn acreage is down and soybean acreage is up in 2022. USDA’s Illinois June Acreage report, issued June 30, reflected what most analysts projected as early as last fall: historic price increases for inputs needed to grow corn– most notably, anhydrous ammonia fertilizers– will cause Corn Belt farmers to curtail corn acreage in favor of soybeans, which costs less to produce.

Comparatively, the USDA estimated the total June U.S. corn acreage at 89.9 million acres, down four percent from last year. U.S. soybean acreage, estimated at 88.3 million acres, is down one percent compared to 2021.

Illinois winter wheat was estimated at 750,000 planted acres, up 12 percent from last year. Harvested acres, at 720,000 acres, is up by 18 percent. 48 percent of the Illinois wheat crop was harvested between June 20-27, pushing the state wheat harvest to 66 percent or nine percent above the average pace, according to the USDA National Agricultural Statistics Service (NASS).

However, there are still around 15.8 million acres of soybeans and 4.3 million acres of corn that remain unplanted across the U.S., NASS reported, leading to speculation about higher-than-average Prevent Planting claims being filed with the USDA as the regional windows for application come to a close.

During a June 29 event at the Chicago Board of Trade, carbon market Indigo Ag issued nearly 20,000 carbon sequestration credits to farmers, and announced future commitments to raising the price paid for agricultural carbon credits from $27 to $40. (Rooster Strategy)