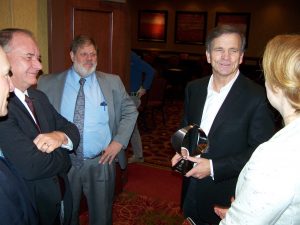 Mark Marquis (second from right) accepts congratulations from members of Illinois Corn, following his naming as Ethanol Producer of the Year at the WILLAg.org Farm Assets Conference, held Nov. 20 in Normal. (Photo by Tim Alexander)

NORMAL — The fifth annual WILLAg.org FM Farm Assets Conference, held Nov. 20 in downtown Normal near the campus of Illinois State University, brought together Illinoisans engaged in a wide spectrum of agricultural endeavors — along with those in supply chain industries — for a full day of fraternization, education and achievement recognition. Highlights of the Farm Assets Conference, formerly known as the Illinois Commodity Conference, included a panel of supply chain representatives explaining ongoing opportunities and premiums available for farmers and ranchers who enter into contractual production contracts with companies like McDonald’s and Anheuser-Busch.

Other highlights: A panel of University of Illinois economists and researchers examining trade, tariffs, grain flow and the farm economy, and the WILLAg Commodity Marketing Panel. Hosted by WILLAg’s Todd Gleason, the conference also featured an update on the growing number of new ag-tech startup companies leasing space at the University of Illinois Research Park, along with a luncheon. The event was preceded by the annual meeting of the Illinois Corn Growers Association, during which members elected new officers and handed out awards to farmers and friends of agriculture.

An Elmwood farmer has been elected president of the Illinois Corn Growers Association during its 2018-19 reorganizational meeting, held prior to the WILLAg.org FM Farm Assets Conference. Ted Mottaz had been a member of the ICGA board for six years, most recently as vice president. Joining Mottaz in leadership roles are vice president Bill Leigh of Minonk, treasurer Matt Rush of Fairfield and secretary Dave Rylander of Victoria. District directors were also elected, including farmer-leaders Randy DeSutter, Terry Smith, Don Guinnip and Joe Murphy. Re-elected at-large chairmen were Kate Danner of Aledo and Rylander.

Mike Adams, radio broadcaster for the syndicated program Adams on Agriculture, was named the 2018 Excellence in Media award winner at the ICGA annual meeting. Congratulations Mike!

Greeting well-wishers in the media room following his recognition by ICGA officials, Hennepin ethanol producer Mark Marquis, owner of Marquis Energy, said he was excited about being receiving the Ethanol Award at the ICGA annual meeting in Normal. Beginning as a 100 million-gallon-per-year ethanol facility in 2008, Marquis Energy has grown to become the largest dry-mill ethanol facility in the world with a production capacity of 1 million gallons of fuel-grade ethanol per day.

“Marquis Energy has seen tremendous success in the ethanol industry in Illinois and has been an amazing partner as ICGA seeks to improve the regulatory climate for ethanol production and use,” said Aron Carlson, outgoing ICGA president, when presenting the award. “We are so pleased to welcome Mark Marquis here today as a representative and co-founder of such an unequivocal success and to thank him for his work selling ethanol, pioneering a successful ethanol exporting program, and working with us to grow the industry.”

Marquis also serves on the board of directors of Growth Energy and chairs its export committee. A member of the Illinois Renewable Fuels Association board, Marquis is regarded as a strong voice for ethanol at the state legislative level.

Illinois Central College instructor Pete Fandel, a Woodford County native, was honored by the ICGA for his environmental contributions and helping farmers to adhere to innovative best management practices. “We are happy to partner with him and his colleagues at ICC on several conservation and water quality projects,” said Carlson. “We find his work extremely valuable to the future of our industry. Pete is committed to helping farmers better understand their farms and their soils and he shows true dedication to helping us improve the environment we’ve been given.”

Fandel teaches agriculture and conducts research at the ICC East Peoria campus, and has served as a cover crop specialist for ICGA. He is active on several committees charge with issues related to soil conservation, water quality and sustainability. He was formerly employed by University of Illinois before coming to ICC.

Director touts ag start-ups at U of I Research Park

Agriculture-based technical start-up businesses are leading the way in new innovations coming out of the University of Illinois Research Park, the business incubator’s associate director told a packed house during the WILLAg.org FM Farm Assets Conference. Calling ag-tech the fastest growing sector, Laura Weisskopf Bleill noted that there are currently over 120 companies employing 2,100 employees at Research Park in Urbana, with more than 800 U of I students employed year round.

New ag-tech startups that have located in Research Park include Agrible-Nutrien, Earth Sense, LifeFoundry, AirScout, EIWA, Farm Afield, and more. They join established companies such as John Deere, Dow Agrosciences, ADM, In-Bev, CME Group, Syngenta and others working in or on the edges of the agriculture industry. The new companies will be spotlighted during the U of I Research Park’s annual open house, to be held March 6, according to Bleill.