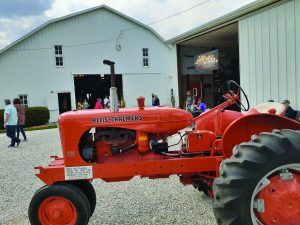 This week’s column focuses heavily on farmers’ responsibilities in adapting current climate change and conservation policies on their operations. Please read on …

BLOOMINGTON — In 2019, IFB voting delegates enacted new policy surrounding global climate change. Since then the Illinois Farm Bureau has followed approved policy set parameters around how the membership engages in conversations pertaining to climate change. In addition to the IFB policy, which addresses issues raised in USDA’s request for comments on climate change policy, IFB solicited feedback from its members. Those farmer-member responses and their suggestions helped shape IFB’s recent comments and recommendations to USDA.

“We are grateful to our members for their thoughtful input,” stated Richard Guebert Jr., IFB president. “Their feedback and ideas helped us keep our comments focused on what farmers need as discussions evolve and policies are crafted that will likely impact our members’ livelihood.”

In summary, the IFB recommendations included streamlining, providing transparency and boosting funding for established popular programs like the Conservation Stewardship Program and Conservation Reserve Program, which are USDA programs that reward farmers who adopt climate-smart farming practices. In addition, IFB recommends simplification of administration of CSP and CRP, and consideration for compensation related to crop insurance to attract higher participation levels.

Relatedly, IFB members across the state are sharing concerns about incentive-based carbon markets. When it comes to USDA support of these emerging markets, IFB members would like to see transparency and consistency throughout the carbon market arena, Guebert said. Also, members say USDA can support the industry by providing rules and a framework for the process to operate and oversee the valuation of the carbon credits. They also feel that incentives must be tied to the land, and early adopters of climate-smart agriculture practices should be treated fairly and recognized with benefits like those who are adopting new practices. In addition, many Illinois farmers have concerns with the details of the contractual agreements, including concepts regarding data collection and stewardship, contract length, valuation of carbon and limitations on future participation.

In a news release last week, IFB welcomed the opportunity to work alongside USDA and other stakeholders to find solutions to these issues. “Not all carbon contracts treat farm practices the same, so the establishment of standards and definitions would be helpful to ensure a level playing field for both producers and those who purchase carbon credits to offset their carbon emissions,” Guebert said.

WASHINGTON, D.C. — The Illinois Farm Bureau’s climate change policy recommendations and concerns were issued on the heels of a statement released by American Farm Bureau Federation President Zippy Duvall, who is calling on the Biden administration to act responsibly in conservation efforts. In a letter to the administration, Duvall asks for clarity on the initiative and asks that farmers are included and credited for their prior work in land and water conservation efforts.

“This ‘30×30’ goal has received a great deal of attention in farming and ranching communities across the country,” wrote Duvall. “America’s agriculturalists are asking whether their good work will be recognized by the administration. They have voluntarily enrolled more than 140 million acres of private land into federal and nonfederal conservation programs — a landmass larger than the size of New York and California combined. Any discussion about conservation must begin with the recognition that farmers and ranchers are leaders in this space and have been for decades.” (AFBF news)

SPRINGFIELD — The Illinois Stewardship Alliance is circulating a petition to encourage state lawmakers to provide a financial boost to the Illinois Department of Agriculture’s Fall Covers for Spring Savings program, which puts $5 per acre in the pockets of farmers who enroll in the cover crop incentive program. Entering its third year this fall, the program currently has only enough funding to support farmers on 50,000 acres.

“In the 2020 application period, farmers submitted over 185,000 acres to be funded through the program and we know that there are even more farmers out there that could use this support. That’s why we are asking the Illinois General Assembly to expand funding for the program to cover at least 200,000 acres in 2021,” said Liz Rupel, ISA policy organizer. “Without increasing the amount of acres planted in cover crops, Illinois will struggle to meet its nutrient loss reduction goals. According to recent research, Illinois is already two centuries away from reaching goals.”

SPRINGFIELD — In a recent column, we shared how State Sen. Doris Turner’s, D-Springfield, new bill would make agricultural science courses count toward Illinois university admission standards. An April 27 news release from Turner’s office, she shared the news that the legislation passed the state Senate unanimously and is now in the hands of the House of Representatives.

“The goal here is to highlight the importance of agricultural studies,” said Turner. “Our current curricula did not reflect that by excluding it from courses that count toward the three required years of sciences, and may have deterred some students from pursuing those studies.”

Turner explained that current minimum requirements to gain admission to state universities include the completion of at least 15 units of high school coursework in the following subjects: English, Social studies, Mathematics, (Laboratory) Sciences and electives in either foreign language, music, vocational education, or art. Additionally, she said some colleges may accept agricultural science under the auspices of a science course — but not all are doing so. Her legislation seeks to add some conformity to the available options.

“We want to encourage students to feel confident and passionate about their career choices especially when choosing a field that has such a substantial and diverse impact,” said Turner.

The Illinois Stewardship Alliance’s 2020 “theory of change” calls on farmers to voluntarily meet the goals of the state’s Nutrient Loss Reduction Strategy and become a part of the climate solution.