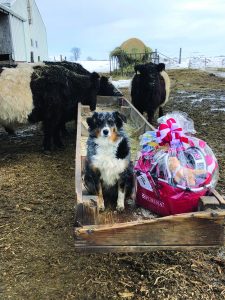 Rayne is a border collie owned by Julie Willis of Sunnybrook Farms in Belvidere. Rayne was Midwest region winner of the AFBF Farm Dog of the Year contest. (Photo courtesy of Codelyn Willis photography)

Illinois farmers are currently enjoying a price rally for corn, soybeans and wheat that has stretched through January. This is leading crop advisers to recommend double-cropping — or using the same land for both summer and winter crops — this year. We also have reports on GROWMARK’s Illinois ag essay winner and one of the nation’s top farm dogs, who resides in northern Illinois. For more please read on …

BLOOMINGTON — Crop futures were continuing to rally at the end of January, with soybeans pushing upwards of $14 per bushel for soybeans and $6.50 per bushel for wheat in Illinois, leading crop advisers to recommend a double crop rotation, where possible. With ending stocks for both crops near seven-year lows, strong export demand is expected to continue as China rebuilds its hog herd after an Asian swine fever pandemic decimated the nation’s livestock sector over recent years.

“We’re seeing growing demand for feed across numerous sectors, including pork and beef, and aquaculture, which is growing across Asia,” noted Guy Allen, an economist and grain marketing expert at Kansas State University, during the virtual Double Crop Farmers Forum, which was hosted by the Illinois Soybean Association last week. Allen added that changing currency dynamics, including a weak U.S. dollar, currently favor U.S. grains and oilseeds.

“The changing value of the U.S. dollar is good for exports. Commodity prices will increase, as will the cost of some inputs with possible inflation,” he said. “We’ve had significant printing of the U.S. dollar. That’s definitely driving the economy.”

According to the USDA National Agricultural Statistics Service, Illinois farmers planted 630,000 acres of what in the fall of 2020, up 11 percent from 2019. (Ill. Farm Bureau news)

BLOOMINGTON — Maggie Handfelt of East Dubuque is the Illinois state winner of the 2021 GROWMARK essay contest for FFA members. This is the 28th year for the essay contest, which is sponsored by the GROWMARK System and FS member cooperatives, in conjunction with state FFA leaders. Its goal: to help young people develop their writing skills, learn about current issues in agriculture, and understand the unique role of cooperatives.

The premise behind this year’s contest was “If you could invent a new technology to improve agriculture, what would it be?” In her contest entry, Handfelt wrote: “The preservation of our natural resources is essential to the sustainability of life to come. The primary concern is conserving forests and prairies that are being turned into agricultural developments. Improper disposal of compostable waste can also create a higher rise in CO2 and methane emissions. All of these problems can be addressed through the use of vertical growing towers with collection basins and other innovations.”

Illinois collie one of US’ top farm dogs

BELVIDERE — A border collie who manages a northern Illinois cattle farm (along with her human owners) was a top finalist of the 2021 American Farm Bureau Federation Farm Dog of the Year contest. The contest celebrates farm dogs that work alongside farmers and ranchers to produce nutritious food for families and their pets across America. The contest is popular with farmers and the general public alike, reaching nearly 400,000 users on social media through People’s Choice Pup.

Midwest region winner Rayne, 6, is owned by Julie Willis, who owns and operates Sunnybrook Farms with her husband, Terry.  Willis said she first learned Rayne was a special dog when the collie placed herself between her and an angry bull in the pasture, putting herself in danger to protect her owner. Rayne was one of four regional runners-up to national winner Bindi, an Australian shepherd from New York state.

The Midwest region’s top farm dog was rewarded with $1,000 in prize money, a trophy plate and a super-sized basket of treats courtesy of contest sponsor Nestle-Purina PetCare.

“The Farm Dog of the Year contest embodies Purina’s belief that people and pets are better together,” said Jack Scott, vice president of sustainability at Purina. “Purina has a long history of sourcing nutritious ingredients from American farms to make our high-quality pet foods. We salute farmers and the important work they do to steward their land and help feed generations of people and pets, with the help of their amazing dogs who help enrich lives on and off the farm.” Congratulations Julie, Terry and Rayne!

PEORIA — Midwest Shows Inc. has announced that the rescheduled 39th Greater Peoria Farm Show, planned for March 9-11 at the Peoria Civic Center, has again been canceled due to the ongoing COVID-19 pandemic. Originally slated for Dec. 1-3, 2020, the state’s largest indoor farm machinery show will now be held in late November and early December, if state and local restrictions are eased.

“We are disappointed to be canceling the show. However, we are actively shifting our focus towards the next Greater Peoria Farm Show, scheduled for Nov. 30 through Dec. 2, 2021,” said John K. Riles, president of Midwest Shows. “This show will provide a great opportunity to celebrate the return to a more normal routine with the area’s agricultural community. We are looking forward to a great show.”

With soybean yields estimated at 43 bushels per acre, based on trend yields from Illinois FBFM farms wheat combined with double-crop soybeans has an expected return of $179 per acre, higher than returns for both corn ($110 per acre) and soybeans ($132 per acre).