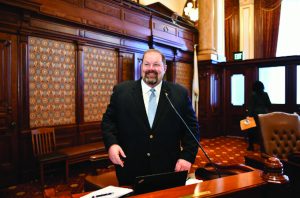 U.S. Sen. Tammy Duckworth has renewed her effort to end the small refinery waivers for ethanol production issued under the Trump administration, which hit Illinois corn growers in the pocketbook. In other recent ag and rural news, Illinois’ 2021 cover crop incentive program is out of allotted acreage thanks to a huge response from the state’s farmers. For more info on these and other news items of interest to Illinois farmers and rural dwellers, please read on …

WASHINGTON, D.C. — Illinois Democratic Sen. Tammy Duckworth renewed her pledge to end the small refinery exemptions for ethanol production granted under the Trump administration when she delivered a plea to President Joe Biden last week to end the exemptions under his watch. Appearing on National Public Radio on Jan. 22, Duckworth said that an investigation into the exemptions should be launched.

“We need that clear commitment to the agriculture sector that we are going to stick with biofuels. The bottom line is we can’t get to a carbon-neutral future without biofuels. You can’t get there just on solar or wind or just a single fuel source,” said Duckworth. “Supporting our ag sector is vital to the American economy. Ag is national security.”

Asked how she viewed Biden’s stance on agriculture, Duckworth noted that the new president expresses strong support for family farms. ”I think you are going to see continued support for investments in bringing people back into ag, at the same time as a commitment you can count on for biofuels,” she said. “You are going to see in the coming five years continuous support for biofuels that you can count on, and feel (confident) to make the capital investments necessary for producing increased amounts of biofuels.”

Duckworth became the first lawmaker to call on the EPA inspector’s office to launch a probe into 35 small refinery exemptions in May 2019. She accuses the EPA of misleading members of Congress about the reasoning behind the waivers.

WASHINGTON, D.C. — In one of his final acts as president, former President Trump allowed the  EPA to grant several more last-minute small refinery exemptions, an action that prompted immediate objections from the Renewable Fuels Association, among others. The RFA filed a petition for review and an emergency motion to stay the effectiveness of the waivers, AgWired.com reported, citing the waivers’ harm to the agriculture industry.

“This would be devastating to America’s ethanol producers, many of which are already on the brink of closure due to the ongoing impact of the COVID-19 pandemic,” the motion reads, in part.

On Jan. 20, the RFA advised freshly sworn-in President Biden that he could cut carbon emissions by 12 million metric tons simply by denying the 66 pending corn ethanol volume waivers from oil refiners looking to dodge their Renewable Fuel Standards obligations. Such a move would cut 10.7 million metric tons of greenhouse gas emissions, according to RFA chief economist Scott Richman. Another 1.2 million metric tons of GHG reductions could be achieved by implementing a 2017 court order to restore RFS blending requirements that were illegally waived by Trump’s EPA, Richman added.

SPRINGFIELD — Illinois farmers were quick to pounce on an offer from the state to subsidize up to 50,000 acres of farmland devoted to winter cover crops. The program, applicable for acreage in Illinois planted to cover crops in the fall of 2020 that will be planted to an insurable crop in 2021, pays growers $5 per acre on the following year’s crop insurance for every acre of cover crop enrolled and verified in the program.

“We were expecting great interest after a successful first year, but to meet our 50,000-acre allotment so quickly was astonishing,” said Jerry Costello II, Illinois Department of Agriculture acting director. “It shows there’s a great interest out there for cover crops and IDOA is committed to promoting conservation farming in Illinois.”

In just its second year, the IDOA’s Fall Covers for Spring Savings program ended with 768 applications requesting over 185,000 acres submitted to IDOA. After opening the application period at 12:01 a.m. Dec. 15 the acreage limit met within its first 24 hours. In 2019, more than 500 applications requesting more 133,000 acres were received. Consistent with last year’s program, qualified applicants will be awarded on a first-come, first-served basis, according to a Jan. 21 IDOA news release.

SPRINGFIELD — State Sen. Patrick Joyce, D-Essex, was announced as the chair of the Senate Agriculture Committee in Illinois’ 102nd General Assembly. In a Jan. 22 Senate Democrats news release, Joyce vowed to be a strong representative when addressing critical issues affecting the state’s food supply chain, while working alongside leaders of the agricultural industry.

“Agriculture is a vital industry in my district and the state of Illinois. I will strive to improve resources and supports for the Illinoisans who work tirelessly to put food on our tables.”

PARK FOREST – Joyce is currently encouraging eligible high school seniors to apply for the annual Conservation Achievement Scholarship, which is now accepting applications. The opportunity is available to students in Illinois who have demonstrated effective, voluntary, long-term dedication to the preservation, protection, enhancement and/or promotion of Illinois’ natural resources

“The price of attending college is a very serious concern for many students and families,” Joyce said. “This scholarship opportunity is a chance to help students lessen the burden of college debt — I hope every eligible high school senior applies.” The scholarship will actually award up to four separate scholarships of $2,000 each for the 2021-22 school year as one-time awards that are nonrenewable. The scholarship funds may be used for tuition, college or university fees, textbooks, or room and board. Funds are mailed directly to the college or university of the successful applicant. Applications, available at www.illinoisconservation.org, are due March 1.

Illinois is the third-largest ethanol producing state behind Iowa and Nebraska. (RFA)