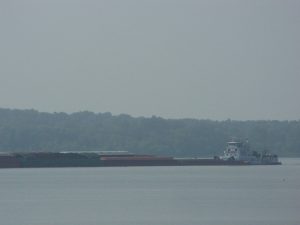 A barge meanders down the Illinois River towards Peoria on a hazy August Sunday morning. August, and summer, was hotter and wetter than normal in Illinois in 2018, according to state meteorologist Jim Angel. (T. Alexander photo)

While waiting for the harvest of 2019 to begin we will have a look at some interesting trade developments regarding NAFTA, as well as an examination of the first round of “trade aid” payments authorized by the Trump administration. We also have a look back at the warm, wet summer of ‘18 and a look ahead about what both Farmer’s Almanacs say about the winter forecast, courtesy the Illinois state meteorologist. For these and other headlines, please read on…

BLOOMINGTON – The Illinois Soybean Growers (ISG) and Illinois Corn Growers Association (ICGA) are among top state agricultural organizations to share enthusiasm for the Trump administration’s proposed trade deal with Mexico. The reorganization of the North American Free Trade Agreement (NAFTA) should benefit American farmers, ranchers and agribusinesses and seems to align with the priorities of the Food and Agriculture Dialogue Coalition, of which Illinois Corn is a member, according to an August 31 ICGA news posting.

ICGA cited many benefits of the proposed agreement, including keeping existing tariffs on agricultural products shared between the two nations at zero. It also “enhances rules for science-based sanitary and phytosanitary measures” and includes “foundational language that specifically addresses agricultural biotechnology,” ICGA noted.

ISG vice chairman Doug Schroeder, a Mahomet farmer, welcomed news of the proposed trade agreement at a time when farmers are gearing up for an expected large harvest. “Trade is vital to Illinois soybean growers and the livestock users who consume our protein-rich soybean meal. For these industries to thrive, we need access to markets such as Mexico (who) is our number two trading partner for soybeans and a top pork importer,” Schroeder said in an ISA news release.

Readers: please submit digital photos of your small or rural church, school or other public structure to me and I will feature them in an upcoming RFD column. Send to farmrep1@gmail.com.

Farmers up for $4.7 billion in initial trade aid

BLOOMINGTON – The Illinois Farm Bureau (IFB) has set up a web tool to help farmers determine their share of $4.7 billion in initial trade aid promised by the Trump administration and intended to make up for losses incurred due to trade wars with China, Mexico and other nations incited by U.S.-led tariffs on foreign imports. Farmers affected by trade retaliation can apply for financial assistance after harvest, the IFB news service reported.

IFB leaders met with Illinois Farm Service Agency (FSA) officials last week to learn more about the three-part trade assistance plan that includes direct payments to farmers, government purchases of surplus food and trade promotion programs. Direct payments will be made to farmers through the Market Facilitation Program (MAP) administered by the FSA, which will also issue applications beginning this week.
Most in Illinois agriculture are greeting the payment announcement with a mixture of appreciation and annoyance, such as Illinois Soybean Grower vice chairman Doug Schroeder. “As soybean producers head onto harvest, we need access to markets from trade deals and a stable Farm Bill, not short-term aid packages. In recent years, more than half of our soybeans have been exported with the majority going to China. More U.S. soy gets exported to China than all other American agricultural products combined. Market access and trade certainty support our families, our businesses and our communities. Short-term aid does not create long-term market stability. Producers need trade, not aid,” said Schroeder in a prepared statement.

URBANA – A pair of recent updates from Illinois State Meteorologist Jim Angel examined the unusually warm and wet summer and offered a murky glimpse at what winter might bring to Illinois. The statewide average temperature for Illinois in August was 74.9 degrees, 1.3 degrees above normal. The statewide average for rainfall was 5.25 inches, up 1.66 inches from normal and the 12th-wettest August on record, Angel reported.

For the meteorological summer (June, July and August), average statewide temperature was 75 degrees, which is 1.4 degrees above normal. The summer statewide average for rainfall was 14.86 inches, or 2.99 inches over normal. While these conditions have made for what many are calling an ideal growing season across much of Illinois, with farmers anticipating big harvests, the picture is less than clear for winter weather– especially if you get your forecast from either Farmer’s Almanac.

SPRINGFIELD –  A new law allowing Illinois farmers to cultivate hemp as a cash crop was recently signed into law by Illinois Governor Bruce Rauner. The Illinois Industrial Hemp Act (Senate Bill 2298), which became effective following Rauner’s August 27 signing, allows farmers to apply to the Illinois Department of Agriculture to grow the crop, which is used for rope, paper, plastics, textiles and even fuel.

“Illinois has some of the best farmland in the Midwest, with fertile agricultural land across all regions of our state,” said bill sponsor State Senator Toi Hutchison (D-Chicago Heights). “This new law ensures our farmers have the ability to produce a product that is already available in our stores.”

Illinois universities have been developing a pilot program for the cultivation and marketing of hemp since a 2015 bill allowing state universities with four-year agriculture programs to establish the programs became law. (Ill. Senate Dems news release)