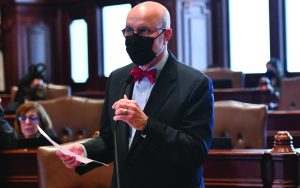 Sen. David Koehler, D-Peoria, is the co-sponsor of the Home to Market Act, which will require a supermajority to pass the Illinois Senate. (Koehler website photo)

This week we take a brief look at a new bill that would benefit small farm and food production, along with a deeper dive into what farm purchases are exempt from sales tax, courtesy Illinois Farm Bureau. For this and more, please plow ahead …

SPRINGFIELD — The Home to Market Act (Illinois SB 2007), which is intended to help small farms and food businesses reach new customers, grow the local food economy and facilitate greater food access has unanimously passed the Illinois House of Representatives, and is now in the hands of the state Senate. Illinois Stewardship Alliance communications director Molly Gleason is asking stakeholders and the public to reach out to their state representatives and urge them to vote in favor of the Act, which is sponsored by Rep. Will Guzzardi, R-West Chicago, and Sen. David Koehler, D-Peoria.

Currently, cottage food operators wishing to sell their products at fairs and festivals, at home, through delivery, and through shipping are restricted by current regulations that limit sales to seasonal farmers markets. These regulations hamper business growth and cripple start-up food businesses. Reforming cottage food law will provide more entrepreneurs, especially women, minority, and low-income entrepreneurs, a means to start or grow a home-based food business while also giving shoppers greater access to Illinois made products, according to the Stewardship Alliance.

The measure will require a supermajority to pass the Senate. Securing Senate co-sponsors would provide the bill with the support it needs to pass, Gleason said in her call to action last week.

BLOOMINGTON — A timely essay by FarmWeek’s Kay Shipman examined the machinery and inputs farmers may purchase tax-free according to Illinois state law. The article, dated May 7, details how the purchase of most farm machinery and equipment, and precision farming equipment are exempt from Illinois sales tax. It explains how under state law, sales tax does not apply to sales of machinery or equipment used or leased primarily for agricultural production. First, however, a buyer must certify the equipment’s use with the Illinois Department of Revenue to qualify for the exemption.

“The key to understanding the agricultural production sales tax exemption is the product must be necessary in the actual growing and/or raising of an agricultural product. There is a misconception that everything purchased for use on a farm will not have a sales tax collected,” said Kevin Semlow, Illinois Farm Bureau director of state legislation.

Purchases of livestock and animals used for farm production are exempt, as are purchases of precision agriculture technology. The exemptions apply to soil testing sensors, computers, monitors, software and GPS-mapping systems.

Also exempt from sales tax are computers and software, along with equipment used in computer-assisted operation of production agriculture facilities, equipment and activities. Products that collect, monitor and correlate animal and crop data for the purpose of calculating animal diets and agricultural chemicals qualify for exemption.

However, when purchasing motor vehicles such as farm trucks and pickup trucks that must be registered under the state motor vehicle code, farmers must pay sales tax. Registered vehicles other than motor vehicles, such as some all-terrain vehicles, may qualify if they’re used for specific production agriculture uses rather than transportation and other activities that don’t qualify, Shipman noted in her article.

Anyone with a specific question about sales tax exemption for farm equipment may email the IDOR at REV.TA-Sales@illinois.gov.

SACRAMENTO, California — Two Illinois farms were among more than 100 to be awarded equipment through the Farmer Veteran Fellowship Fund. In a May 6 announcement, the Farmer Veteran Coalition identified the RJ McConnell and Amy Hess farms as the Illinois recipients of the fund, which supports veterans in their early years of farming and ranching.

“We directly purchase a piece of equipment the farmer has identified as being critical,” said Jeanette Lombardo, FVC Executive Director. “Our veterans put their lives on the line to protect us. It’s an honor to help them grow their operations so they can continue to feed their communities.”

Hess is an Army veteran who is now a full-time poultry farmer in Aledo, while the McConnell farm is described as a start-up farm established by Richard and Jenni McConnell, Army veterans. “Tears of joy!” Hess exclaimed in a news release announcing the grants. “These funds will purchase a large incubator cabinet for hatching. [It] will make me just about 100 percent self-sufficient and not reliant on a hatchery. This is amazing!”

SPRINGFIELD — The chairs of the House and Senate Redistricting Committees recently offered Illinois residents an opportunity to provide additional input in the redistricting process by taking advantage of a new online map making portal to draw and submit proposed legislative boundaries. The online portal was established by the Illinois Senate Democratic Caucus and the Illinois House Democratic Caucus to allow for greater public participation in redistricting, which occurs once every 10 years to adjust legislative boundaries in response to population shifts. It is the first time in Illinois history the public has been able to go online to craft suggested maps, which will be reviewed as part of the public record. The Public Drawing Portal can be accessed at www.ilsenateredistricting.com and www.ilhousedems.com/redistricting. (Illinois Senate Democrats news release)

The Illinois Soybean Association has been delivering lunches to soybean farmers in the field representing countries that are major importers of Illinois soybeans. ISA is focusing on six key international markets: Egypt, Mexico, Indonesia, Pakistan, Taiwan and Bangladesh. Each lunch matches the cuisine of one of these countries, giving farmers a chance to learn about ISA’s trade and export programs while they try new foods; It also lets farmers know they are appreciated during planting season. (ISA news)