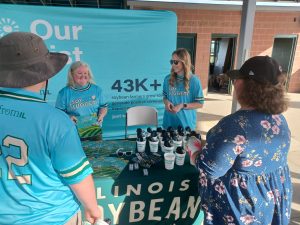 Members of the Illinois Soybean Association took over the Corn Crib baseball stadium in Normal on July 29 as part of its Summer of Soy campaign. Earlier in the week, new ISA farmer leaders were elected. (Photo by Tim Alexander photo)

In this week’s column we have news about commodity prices, flash flooding in the St. Louis area and a special shout out to farmer-leaders stepping up to serve Illinois’ agriculture industry.

BLOOMINGTON — Kane County farmer Steve Pitstick, District 2, was re-elected as chairman of the Illinois Soybean Association during their monthly board meeting on July 29.  Pitstick, who produces corn and soybeans near Maple Park, also works as an adviser to startup ag tech companies.

“I look back on the last year and all that we’ve accomplished, and I’m proud to say we’ve made some measurable impacts,” says Pitstick. “From passage of critical legislation, the opening of the Lombard office, hosting the U.S. President on an Illinois soybean farm and more, I’m looking forward to serving Illinois soybean farmers for another term. We have an exciting future ahead.”

At-large directors seated include: Betsey Emerick of Vandalia, and Scates. In addition, four Illinois soybean farmers were elected to represent the state on the board of the American Soybean Association. Congratulations to these Illinois farmer leaders!

In addition to prices, the volume change of commodities marketed also influences the indexes. In June, there was increased monthly movement for wheat, hay, peaches, and corn and decreased marketing of oranges, milk, broilers, and strawberries, the report revealed.

URBANA — The most recent livestock production figures from Illinois (see previous news item) reflect a 35 percent increase since June of 2021. However, producers are now contracting their cowherds and price increases can be expected in the future, according to a Western Illinois University agricultural economist and member of the University of Illinois farmdoc team.

“Total inventory on July 1 is estimated at 98.8 million head, down 2 percent from a year ago, making this the fourth consecutive year of decline. All cows and heifers that have calved total 39.8 million head, also nearly 2 percent below last year, which reflects 2.4 percent fewer beef cows at 30.4 million head and 0.5 percent fewer milk cows at 9.45 million head,” Jason Franken said. “This report indicates the lowest level midyear inventory of cattle overall since 2015, and of beef cows in particular since 2014, when producers were still rebuilding following the drought in 2012.”

Franken noted that with around 2 percent fewer cows and heifers currently calved, the 2022 calf crop, at 34.6 million head, is 1.4 percent below the 2021 level. This should help hold down the number of animals on feed and beef production in 2022 and 2023, while likely leading to higher prices over the next four quarters, he said. (U of I College of ACES news)

O’FALLON — Have you ever wanted to nominate someone you know for Farm Progress’ annual Illinois Master Farmer recognition awards? Here’s your chance! Prairie Farmer editor Holly Spangler is seeking nominations for the next crop of Master Farmers, and maybe it’s your parents, a sibling, your neighbors, a friend or a colleague. Or, maybe it’s someone you’ve served with on a board, or someone you’ve long looked up to.

To qualify for the award, candidates must farm in Illinois, deriving the majority of their income from agricultural production. They must have proven ag production records, recognized leadership, and have served the community at the local, state or national level. In addition, each nominee should be actively engaged in full-time production agriculture.

The 2023 application form is available online. Download it, fill it out and send it in, complete with letters of support, by Aug. 26. For more information or to have an application sent to you, email holly.spangler@farmprogress.com.

URBANA — Illinois State Climatologist Trent Ford said last week that his thoughts were with those in the St. Louis area and elsewhere who were suffering through the aftermath of heavy flooding.

“A series of training thunderstorms moved over the St. Louis area on Tuesday morning, dropping up to 13 inches of rain in six to eight hours, with the highest totals just northwest of the city. On our side of the river, Cahokia Heights, East St. Louis, and Belleville got the most rain, with 7-8 inches in about six hours. Just days before the flooding in St. Louis, parts of Lake and northern Cook counties picked up 5-6 inches in about eight hours,” said Ford, adding that the intense rainfall caused localized flooding in parts of Lake Bluff and Lake Forest. ( “Illinois Crop Update 7/29/2022.” University of Illinois Extension)