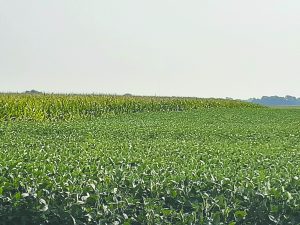 Corn and soybeans growing in Woodford County. The USDA recently downsized expectations for the Illinois corn harvest based on weather developments. (Photo by Tim Alexander)

Effects of the Aug. 10 derecho wind storm can now be documented: USDA has lowered expectations for the 2020 corn harvest. In this week’s farm and rural news report, we will also take a look at drivers behind increased export demand for corn. In addition, soybean growers have identified their 2021 priorities. In what areas will the Illinois Soybean Association invest valuable checkoff funds? For the answers, please read on …

SPRINGFIELD — We reported last week in this column that post-derecho regional crop surveys mostly projected corn yields for Illinois that were much lower than USDA’s August projection of 207 bushels per acre. USDA’s Sept. 11 Illinois Crop Production report reflected the new reality, making a 4 bu./acre downward adjustment for corn yield, to 203 bu./acre. The projection is up 22 bu./acre from USDA’s September 2019 projection. Production, forecast at 2.17 billion bushels, is up 18 percent from last year.

USDA’s National Agricultural Statistics Service also lowered its national corn yield projection by 2 percent and soybean projection by 3 percent. NASS’ 178.5 national corn estimate would still come in as a record high. NASS acknowledged that the adjustments were made mostly in response to the August derecho that swept through seven states, leaving a historically wide swath of crop damage in its wake — most notably in Iowa.

“In response to the derecho experienced by Iowa producers on Aug. 10, NASS collected harvested acreage information for  both corn and soybeans,” NASS stated in a news release. “This data was analyzed along with remote sensing and administrative data in preparation for this report. As a result, NASS lowered corn harvested acreage in Iowa by 550,000 acres.”

Illinois producers, for the most part, are not expecting to bring in a 203 bushel per acre corn harvest. Allendale Inc. released its national yield survey results last week, projecting a national corn yield of 178.28 bu./acre. In Illinois, Montgomery County’s annual crop tour resulted in a projection of 185.5 bu./acre. USDA-NASS is calling for a soybean harvest of 62 bu./acre in Illinois, up eight bushels from 2019.

BLOOMINGTON — Doug Schroeder, president of the Illinois Soybean Association and a Mahomet farmer, announced the fiscal year 2021 priorities for the organization last week.

“We have adopted a new strategic plan for our board and staff to implement that can equip Illinois soybean farmers for the future. Projects will be funded in three critical areas; market development, government relations and utilization,” stated Schroeder, in an ISA news release issued last week. “We want to be a market leader in sustainable soybean production and profitability by finding ways to increase Illinois soybean demand and use.”

Schroeder also announced that for the first time, the ISA has named a committee that will focus entirely on government relations. “This new committee will give Illinois soybean farmers a stronger voice on state and national issues,” said Ron Kindred, Government Relations Committee chairperson and soybean farmer from Atlanta. “We will be raising awareness of critical issues as we build relationships and advocate about common interests we share with the rest of the Illinois ag community.”

In addition the ISA will continue to look for ways to increase domestic soy biodiesel use and improve soybean productivity and quality as well as help Illinois soybean farmers implement best management practices.

“The board is currently investigating soy-based sealant and soy-based adhesive as methods to use more soy in a new market,” says ISA utilization committee chairperson David Wessel from Chandlerville. “On the sustainability front, the committee will concentrate on demonstrating value by partnering with various groups that can help communicate the message.” ISA checkoff and membership programs represent more than 43,000 soybean farmers in Illinois.

WASHINGTON, D.C. — This month’s 2020-21 USDA World Agricultural Supply and Demand Estimates report calls for reduced U.S. corn production, further acknowledging weather developments that have many analysts projecting a smaller than predicted U.S. corn harvest in 2020. “Corn production is forecast at 14.9 billion bushels, down 378 million from last month on a lower yield forecast and reduction in harvested area,” the report reads, in part.

Coupled with foreign developments, the development is bullish for corn growers and investors. “Exports are raised 100 million bushels reflecting reduced supplies in competitor countries. With supply falling more than use, corn ending stocks are lowered 253 million bushels from last month. The corn price is raised 40 cents to $3.50 per bushel,” the USDA office of the chief economist reported.

Soybean yield expectation was also lowered, perhaps due to drought conditions affecting much of the Midwest and Corn Belt. “Soybean production is projected at 4.3 billion bushels, down 112 million on a lower yield forecast of 51.9 bushels per acre,” according to the Sept. 11 report.

BLOOMINGTON — We reported in this column last week that the Illinois Corn Growers Association is celebrating a surge in demand for Illinois corn that is fueled by a historic spike in global meat demand, which increases the need for corn consumption for livestock. In 2019, U.S. farmers exported 27 percent of the hogs they raised, contributing as much as $0.46 per bushel specifically for Illinois corn farmers.

Last week, the U.S. Pork Checkoff reported that January-through-July 2020 exports accounted for 30.7 percent of total U.S. pork production, at 3.9 billion pounds worth more than $4.5 billion.  China and Hong Kong remain the leading destinations for U.S. pork exports, with demand up 5 percent. In addition, Vietnam and the Philippines continue to show strong demand for pork, with U.S. exports to Vietnam up 173 percent.

USDA’s 2020-21 projection for corn use for ethanol was lowered by 100 million bushels last week, due to reduced motor fuel demand related to COVID-19. (USDA-NASS WASDE report)