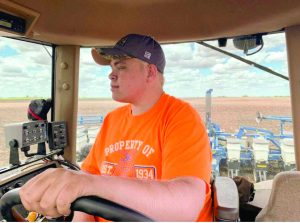 In what his mother is calling a Christmas miracle, the search for a donor kidney for a Streator teen and former FFA member has ended with a successful transplant. We have the details, along with projections for dairy, corn and soybean margins for 2022 and more. Please plow on …

PEORIA — The Illinois agriculture community has been closely monitoring the Moritz family of Streator’s quest for a donor kidney for their 19-year-old son, Lance, a farmer and former FFA member at Streator High School. The Illinois Farm Bureau news service reported last week that the family’s search came to an end just before Christmas, when Lance Moritz received a kidney from OSF Transplant Service at a Peoria hospital. At press time, the surgery was reported to be successful and the patient is recovering well.

“It was a perfect match,” Mary Moritz, Lance’s mother, said from her son’s hospital room on Dec. 23. Lance Moritz was born with tuberous sclerosis, which causes tumor growth on organs. As recently as Thanksgiving, the teen’s kidneys were functioning at just 10 to 12 percent capacity. An urgent plea for a donor kidney was made through social media and given extra attention by the IFB news service.

Dairy producers expected to profit in 2022

URBANA — Lower nonfeed costs coupled with lower milk prices did nothing to break the yearly string of negative economic returns for dairy prices in 2021, but it appears that relief could be on the way in 2022. This is according to Brad Zwilling, farm economist for Illinois FBFM and the University of Illinois Department of Agricultural and Consumer Economics, who reported that the $18.10 average paid per hundredweight for milk was less than total economic costs of $21.58 in 2021. Meanwhile, milk prices continued to decline.

“2021 is projected to be about the same as 2020 and will not exceed economic costs resulting in continued negative profit margins for dairy producers. However, 2022 is projected to have much higher milk prices and lower feed cost leading to projected positive economic returns in 2022,” according to Zwilling. “The average milk price for 2021 is projected to be about 1 percent less or about 10 cents per hundredweight lower than the average for 2020. Higher milk production and continued uncertainties in transportation will lead to lower prices in 2021. United States milk production is expected to increase about 1 percent in 2021. 2022 projections from the United States Department of Agriculture show milk production increasing 1 percent from 2021 and milk prices increasing 12 percent from 2021 estimates.”

Zwilling’s full report, “Economic Review of Milk Costs in 2020 and Projections for the Rest of 2021 and 2022”, is available online at www.farmdocdaily.illinois.edu.

URBANA — University of Illinois farm economists issued their projections for corn and soybean break-even prices for 2022 during the Christmas week. “Break-even prices to cover total costs for 2022 are projected at $4.73 per bushel for corn and $11.06 per bushel for soybeans. Compared to historical levels, these break-even prices are very high. While current fall bids are above break-even levels, the high break-even levels present risks in 2022,” stated the U of I farmdoc team in a Dec. 21 report, “2022 Breakeven Prices for Corn and Soybeans”, authored by economists Gary Schnitkey, Carl Zulauf, Nick Paulson, and Krista Swanson.

“High break-even price levels highlight the risk associated with crop production in 2022. Current fall bids — $5 per bushel for corn and $12 for soybeans — are above break-even levels. However, commodity prices will need to remain at historically high levels for profitable crop production to occur. Pricing some grain at current levels would be prudent,” the economists concluded.

BLOOMINGTON — Over 400 Illinois Farm Bureau members signed a letter of opposition to the Biden administration’s proposed Build Back Better bill, citing costs. At the IFB’s 2021 Annual Meeting in Chicago earlier in December, the members said they oppose the “massive amount of spending” associated with the legislation.

“As citizens and taxpayers, we would prefer to see enormous, consequential public policy decisions and changes to tax policy addressed in a bipartisan manner, which has surely not been the case with the Build Back Better Plan,” the letter read, in part.

Benefits to agriculture within the BBB plan include $28 billion for conservation plans established under the 2018 Farm Bill, $18.3 billion for rural energy and electricity programs and $1 billion to expand biofuel distribution and fueling facilities, according to the IFB. (IFB news)

BLOOMINGTON — Organizers of the Illinois Specialty Crops Conference, scheduled for Jan. 5-7 in Springfield and online, have announced keynote speakers for the three-day event:

Hugh McPherson, a fifth-generation family farmer, will offer the Jan. 6 afternoon keynote as he encourages attendees to ‘get lost’ in agriculture. McPherson is the creator of Maize Quest, an interactive Cornfield Maze Adventure that started on his home farm in York County, Pennsylvania. He will offer specialty growers tips on how to diversify their businesses with entertainment.

The Jan. 6 evening banquet keynote will be led by Alicia Nesbary-Moore of Herban Produce in Chicago. According to the specialty growers, Nesbary-Moore cultivates an environment that focuses on empowering residents of minority neighborhoods that have suffered decades of disinvestment. Under her leadership, Herban Produce strives to bring a helping hand and fresh start to deprived city blocks of a community that historically has been a food desert.

The 2022 Illinois Specialty Crop Conference and Trade Show will feature more than 45 exhibitors and 65 educational sessions, which will be available online year-round for registrants.