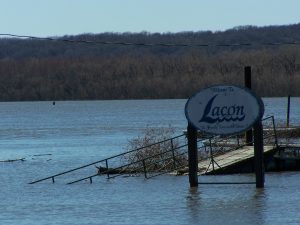 Barge movements of grain and other commodities were interrupted due to moderate flooding on the Illinois River, where depths of more than 26 feet were recorded at Lacon and Peoria earlier in March. (Tim Alexander photo)

A full week of ag-related news is topped by the Illinois Soybean Association parting with President Trump over his controversial foreign trade stance. In addition, the Illinois Corn Growers Association announced it would be in Washington, D.C. this week to outline growers’ legislative priorities to Illinois lawmakers. For more on these issues and other top farm and rural news headlines, please read on…

BLOOMINGTON — As President Donald Trump’s support among the agriculture sector continues to erode due to his controversial trade and tariff proposals, the Illinois Soybean Growers group is among the latest farm organizations to make a break with the president over his policies. In response to Trump’s issuance of new tariffs, the ISG issued a statement from Lynn Rohrscheib, ISG chairwoman and a farmer from Fairmount, in which she said the group is “upset” about implications that may result from the decision.

“These potential tariffs have the potential to heavily impact soybean farmers. As an industry, we rely on these markets to sell our crop and maintain our profitability, which in turn supports our communities. Our prices are already down 40 percent and farm income is down 50 percent from years past. We need international markets to thrive,” Rohrscheib stated, in part. “About 60 percent of the nearly 612 million bushels of soybeans grown by farmers like me throughout Illinois in 2017 will be exported. China is our top customer, by far, and purchases nearly 25 percent of Illinois soybeans. According to U.S. Census Bureau data, China accounted for about $14 billion in value and nearly 1.2 billion bushels of soybeans from the U.S.

“We have seen that Brazil and Argentina are happy to take our place in the Chinese marketplace. Their harvest will be in full swing and they can supply the market both short and long term. Illinois soybean growers look to the White House to move forward with a China strategy that strengthens the competitiveness of our domestic industries while at the same time growing our export opportunities.”

Corn Growers fly in their priorities

BLOOMINGTON — Leaders from the Illinois Corn Growers Association are also making their voices heard in Washington. As part of their scheduled yearly “fly-in,” the farmers highlighted 2018 ICGA priorities as they relate to the next farm bill, trade agreements, waterways infrastructure and foreign and domestic market access for ethanol blended biofuels.

“These days, it’s always a good time to get to the Hill and talk corn farmer issues, which are moving a faster pace than ever,” said Aron Carlson, ICGA president and a Winnebago farmer. Carlson was among the contingent that encouraged the Illinois delegation to maintain the crop insurance plan in the next farm bill as a primary risk management tool. This follows President Trump’s threat to gut the farm bill’s crop insurance program. The farmer leaders are also asking Congress to improve upon the existing farm bill safety net program, grow and maintain foreign export markets through existing or new trade agreements, secure funding for lock and dam improvements on the nation’s inland waterways system and build market access for higher blends of ethanol through market development and regulatory restructuring.

“While we’re in D.C. we’ll also be meeting with representatives of the governments of Mexico and Canada to talk about trade issues,” Carlson said, in an ICGA news release issued last week. “We’ll be arriving on the heels of the latest round of NAFTA talks, and that would be timely enough in and of itself. But with the president signing the executive orders enacting tariffs against steel and aluminum imports, there’s never a time like the present to sit down in person with our trading partners and reassure them of our commitment to maintaining the free and open trade of corn and corn related products.”

The annual damage from SCN is greater than that of the next three most destructive soybean pests combined. (Dale Ireland/Syngenta)

CARBONDALE — With soybean cyst nematode populations across the Midwest showing increased reproduction in soybean varieties using the PI88788 source of resistance, researchers at Southern Illinois University and the University of Illinois are currently exploring whether cover crops can be a useful tool in managing SCN. The answer, so far, appears to be yes, according to Jason Bond, professor of plant soil and agricultural systems at SIU. Bond is part of a team that has already gained significant knowledge after collecting SCN samples last fall to establish baseline counts.

Egg counts ranged from zero to 37,600 eggs per 100 cc of soil. Egg counts of more than 2,000 are considered cause for concern, with more than half of the samples eclipsing the cause for concern threshold. “In 17 years of in-field trials, I’ve never seen such wide swings in sample counts,” said Bond. “This range in egg counts reinforces how important it is to test for SCN every couple of years.”

Earlier research suggests that planting either grass or wheat cover crops can reduce SCN egg populations in soybean fields. “These were limited trials, but if we can repeat these findings, we’ll help show that adding wheat or grass covers to the rotation before soybeans can provide another tool for managing SCN,” said Dan Davidson, Illinois Soybean Association research coordinator. (ISA news release)

PEORIA — Required classes for crop applicators who want to apply dicamba to in-season soybeans this growing season are continuing across the state. The Illinois Department of Agriculture-approved sessions, led by certified applicators, came to the Peoria Civic Center March 12. Peoria County Farm Bureau manager Patrick Kirchhofer said the primary issue with dicamba is its proneness to volatility and the negative effect on nearby crops that do not have the dicamba-tolerant trait.

Classes continue this month across the state. Call the Illinois Fertilizer and Chemical Association at 309-827-2774 for training locations, dates and times, or visit www.ifca.com/IllinoisDicambaTraining.