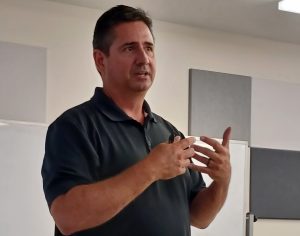 Jerry Costello, Illinois Department of Agriculture director, visited a field day at the Illinois State University Farm near Lexington July 12 to praise research being done on cover crops at the 440-acre facility. (Photo by Tim Alexander)

This week we have an update on crop progress in Illinois, with drought conditions delaying late-planted crops. In addition, we have news on cover crop programs available to Illinois farmers and help from USDA for “double-crop” growers. Please read on …

SPRINGFIELD — Crop progress is behind pace across the state of Illinois, according to the latest Illinois Crop Progress and Condition report issued by the USDA’s National Agricultural Statistics Service.

Drought is the likely reason for the lag in planting progress, reported Talon Becker, University of Illinois Extension commercial agriculture educator for south-central Illinois. “With no rain in the south-central Illinois region, and last week’s storms being largely scattered with variable totals, crops in the area are starting to show some stress again. This is particularly true for later planted corn, likely due to shallower roots not being able to tap into some of the deeper soil moisture. Earlier planted corn is tasseling with some silks starting to emerge. At this time, most of that corn looks relatively unstressed,” Becker said on July 15, adding that while double crop beans have largely reached the first trifoliate stage, growth has slowed with the dry conditions.

URBANA — A silver lining to the mostly dry weather across large parts of Illinois is reduced disease pressure on crops. This was noted by Chelsea Harbach, University of Illinois commercial ag educator from northwestern Illinois, in her weekly Illinois Crops Update published by farmdoc.

“Planes are a-flying in western Illinois this week, which means those fungicide applications are going on in a timely manner. The weather has also been very temperate with little rain, and the outlook is hot, hot, hot, with little to no rain. What does this mean for diseases? Well, I suspect we might have a reprieve from some of the foliar diseases that have been particularly bothersome in years past such as corn tar spot, grey leaf spot, or even Septoria leaf spot on soybeans,” Harbach said.

“Time will tell, though, as disease development is one-third dependent on a favorable environment for the pathogen (disease triangle!). We do have one confirmed sighting of tar spot on corn in Henry County. I do know that there is more tar spot out there, but finding it can be something of an eye strain. The sheer fact is that the disease pressure just isn’t there right now and that largely has to do with the weather we’ve had and the weather outlook.”

BLOOMINGTON — Words turned into actions last week when the United States Department of Agriculture announced added flexibility for producers in accessing crop protection tools that encourage the expansion of the double cropping practice in Illinois. According to a July 12 news release from the Illinois Soybean Association, USDA is expanding counties that have double crop coverage as well as instituting a blanket written agreement process for farms in counties with double crop history to have increased access to crop insurance options.

The announcement follows a May visit by President Biden to the Kankakee farm of Jeff and Gina O’Connor, where Biden promised Illinois agriculture leaders and farmers that help would be on the way to encourage U.S. farmers to grow more food through double-cropping. Among the farmer-leaders in attendance was ISA chairman Steve Pitstick, who was quick to praise the actions by Biden’s USDA and Risk Management Agency.

“As a farmer I am always looking for opportunities to add more tools. Gaining increased support for double cropping wheat followed by soybeans gives farmers another option to manage soil health and the profitability of their operations,” Pitstick said. “I want to commend USDA and especially USDA RMA regional staff for their dedication to this issue and working to add tools for Illinois farmers.”

LEXINGTON — Illinois Agriculture Director Jerry Costello made a surprise visit to a July 12 field day at the Illinois State University Farm near Lexington to praise research being done on cover crops at the 440-acre facility. While there, he also hinted that the state’s Spring Savings for Fall Covers program, which rewards farmers with a crop insurance discount for planting cover crops,  could be expanded in the near future.

“There are many things we are working on, some of which I can’t give you the specifics of right now,” Costello told the dozens of agronomists, farmers and university researchers on hand for the field day, which was sponsored by the McLean County Farm Bureau. “I can assure you that we will hopefully have some good things to announce in the near future.”

In addition to the IDOA cover crop program, which currently pays $5 for each acre of cover crops, American Farmland Trust has begun taking applications for its new Illinois Cover Crop Initiative program. The program is a partnership of AFT, Archer Daniels Midland, the Natural Resources Service, National Fish and Wildlife Foundation and Farmers Business Network.

ICCI incentives will be available to an estimated 400 farmers enrolling up to a total of 75,000 acres. The acres may have previously been planted in cover crops. Contracts will be awarded on a first-come, first-served basis until 75,000 acres are enrolled.

Incentives include annual $10-per-acre payments with technical assistance in collaboration with farmers’ trusted retail partners and conservation organizations. Farmers have an option to sign contracts for one, two, three or four years and will be required to follow NRCS standards and specifications, according to an Illinois Farm Bureau report.

R.F.D. NEWS & VIEWS: Ag groups going out to the ballgame