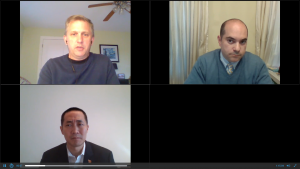 Grant Gu was in the home stretch of a 10-mile trail run when he was stopped in his tracks.

The Naperville resident of almost 30 years said after passing two women on the trail a few miles from his home, he felt a whack on the back of his right thigh.

Stopping, he turned and saw a branch in the middle of the path that had not been there previously. He looked at the women and one of them said, “It fell.”

Rejecting that claim, Gu wanted an answer. One of the women said she had taken a swing at him with the branch because he had coughed at her and not covered his mouth.

“I said, ‘I didn’t realize I did that and if I did, I apologize,’” said Gu, who is Chinese American. “She then started to scream at me, ‘You are a sick person. You need to go back to China.”

Gu shared his memories of the March incident during a May 5 virtual event conducted by U.S. Rep. Sean Casten, D-6th.

Casten said since January there has been a significant increase in hate incidents nationally and in the area targeting Chinese Americans because of the coronavirus originating in China.

Gu said he was not going to file a police report on the incident because he was not injured, but decided to do so after thinking about his own adult children.

“Could they face something worse?” Gu said he asked himself.

David Goldenberg, Midwest director for the Anti-Defamation League, said his organization has seen an increase in hate incidents.

“In just the last two months, ADL has tracked an escalation of racism, antisemitism and hate, both in person and online, related to COVID-19,” Goldenberg said. “Most of this hate has unfortunately targeted the Asian American, Jewish and other marginalized communities.”

He said racist rhetoric that had previously only been on dark web platforms is making its way onto common social media platforms.

“We are starting to see the mainstreaming of hate,” Goldenberg said.

He noted that earlier this spring the words “Make China pay” were written on the wall of a bus shelter in Evanston.

Goldenberg said racism has been rearing its head as of late through online hate; Zoom bombing; physical presence, such as rallies and protests; and vandalism and assaults.

Anna Guevarra, founding director of the Global Asian Studies Program at the University of Illinois at Chicago, said Asian Americans being targets of racism is nothing new.

“It has always been here,” she said. “There’s a history of anti-Asian sentiment.”

She said when the Bubonic Plague hit in 1899, buildings were burned in the Chinatown neighborhood of Honolulu and Chinese residents were put into quarantine.

“There’s a perception of Asians being biologically diseased, that they are unsanitary beings,” Guevarra said.

“Racism has escalated into hate incidents and violence,” Kang said. “We have seen an uptick in reported incidents.”

He said Muslim Americans, who faced racism in the aftermath of the terrorist attacks of Sept. 11, 2001, told him to expect anti-Asian American sentiment to last a while.

“They said it is not going to go away in year one or year two,” Kang said.