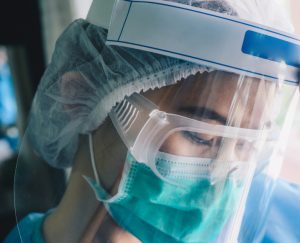 Hospitalizations continued to trend upward as well, with 1,411 hospital beds in use by COVID-19 patients, including 304 intensive care unit beds and 121 ventilators as of April 1, 2021.(Illinois Nurses Association)

Hospitalizations continued to trend upward as well, with 1,411 hospital beds in use by COVID-19 patients, including 304 intensive care unit beds and 121 ventilators.

Vaccinations continue to increase, but the vast majority of Illinoisans have still not been completely vaccinated. As of April 1, 17.3 percent of the state’s population, or over 2.2 million people, were fully vaccinated. More than 5.9 million doses have been administered of the more than 7.5 million doses that have been distributed to providers.

According to a New York Times database, Illinois was 20th of all states as of Wednesday, March 31 with 31 percent of the population having received one dose of the vaccine. It was also 20th for percentage of allocated doses that have been used, at 79 percent.

On March 31, national news outlets including Politico and the New York Times reported that a “mix-up” at the factory of Emergent BioSolutions, which manufactures vaccine for both Johnson & Johnson and AstraZeneca, mixed the ingredients of two different vaccines, spoiling up to 15 million doses of the Johnson & Johnson vaccine.

A spokesperson for Gov. J.B. Pritzker said the state’s anticipated shipment for next week is not expected to be affected by the error, but the administration is awaiting further guidance from the U.S. Centers for Disease Control and Prevention moving forward.

The state has reported 351 cases of COVID-19 variations, which are mutations of the original new coronavirus that could prove more contagious or deadly.

The uptick in the general disease spread and hospitalizations for the virus have halted entry into a “bridge” phase to reopening that would have allowed for greater maximum capacities at social events, bars, restaurants and other businesses.

Roughly two weeks after Pritzker announced the bridge phase, the plan is put off indefinitely until hospitalizations and new cases stop increasing, even though more than 70 percent of seniors have received at least their first dose of the vaccine — a prerequisite for entry into the next phase.

As of March 31, the state saw 146 new hospital admissions for COVID-19-like illness on Monday, which marked 14 straight days of increases for the number. Monday was the latest day for which that data was available.

Continued claims decreased by 4 percent from the week prior, to 215,164.

The Illinois Department of Employment Security reported that unemployment rates increased and jobs decreased in every metro area of the state in the month of February compared to the year prior, which was the final month before the pandemic began wreaking havoc on public health and the global economy.

All 14 metropolitan areas saw decreases in nonfarm jobs, with the Chicago-Naperville-Arlington Heights Metropolitan Division seeing a decrease of 8.8 percent, or 330,200 jobs. The Elgin Metro Division fell 8.2 percent or by 21,000 jobs, and the Kankakee area fell 8.1 percent or by 3,700 jobs.