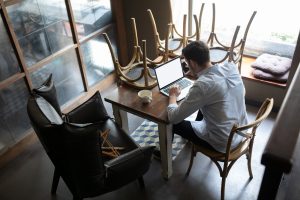 SPRINGFIELD — Hospitality jobs in Illinois have declined nearly 52 percent since the pandemic began, according to new data, as lawsuits continue against the governor’s orders to close nonessential businesses.

While leisure and hospitality jobs were hit the hardest, the number of small businesses open in Illinois overall has fallen by about 36.5 percent, as of March 20, compared to last January, based on data compiled by Opportunity Insights, a nonprofit group at Harvard University.

Opportunity Insights’ data shows a significant number of closures following the governor’s stay-at-home order which took effect in March and continued to the end of May. The percentage of small business closures in Illinois was about 5 percent in early March 2020, and reached more than 42 percent on March 29, according to the data.

The decline in Illinois’ small businesses is similar to the national trend for the same time period. Nationally, the number of small businesses decreased by about 34 percent, with about a 51 percent decline in leisure and hospitality jobs, according to the data.

The data is based on small business transactions and revenues from Womply, “a company that aggregates data from several credit card processors to provide analytical insights to small businesses and other clients,” according to the study.

The data also shows that small business revenue overall in Illinois fell by nearly 28 percent from January 2020 to March 20. The amount of total revenue from hospitality and leisure businesses specifically saw a 57.9 percent decrease in that time period.

As the first COVID-19 cases were reported last March, Gov. J.B. Pritzker issued his first stay at home order March 20, ordering nonessential businesses — like restaurants and some retail stores — to close. The order was extended through the end of May, with some restrictions on in-person dining in bars and restaurants lifted in June.

In mid-May, a group of individuals and businesses — including a car repair shop, restaurant and pet groomer — sued Pritzker in federal district court in Chicago. They argued Pritzker’s executive orders violated the ‘takings’ clause of the 5th Amendment, and violated their rights to due process.

The takings clause states the government is prohibited from taking private property for public use, without just compensation. 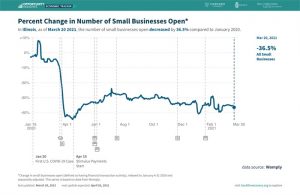 A new data tracker created by a team at a Harvard University nonprofit shows how the pandemic has impacted small business closures and revenues, among other economic indicators. In Illinois, the percentage of open small businesses fell by 36.5 percent from January 2020 to March 2021. (tracktherecovery.org)

Based on these claims, they asked the court to award them monetary damages for lost revenue and profits.

Last week, a federal judge dismissed the case. Judge Franklin U. Valderrama found the businesses’ claims were barred by the 11th Amendment, which provides general immunity to states from lawsuits by individuals.

Because state officials, like Pritzker, who are sued in their official capacities are considered the “state,” Valderrama ruled that Pritzker is protected from the lawsuit’s claims under the 11th Amendment.

A separate group of lawsuits were filed by restaurants and bars that were forced to close following Pritzker’s reinstatement of the indoor dining ban in November. The businesses argued that Pritzker lacked the authority under the state law to impose an order forcing restaurants to close indoor dining.

One Kane County restaurant, FoxFire, has continued to pursue its lawsuit in Sangamon County court, and even appealed to the Illinois Supreme Court, which has not accepted the case.

Lawyers for FoxFire, which has remained open to indoor service despite the order, have asked the governor to produce discovery, or evidence, to support his ban on indoor dining.

The governor’s lawyers have filed a motion to dismiss to FoxFire’s lawsuit. A judge in Sangamon County heard arguments Tuesday, March 30 on that motion. The judge said she expects to issue a ruling in that case within two weeks.