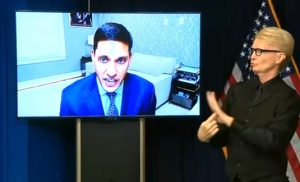 SPRINGFIELD – While COVID-19 infection rates continued to decrease the number of people hospitalized for the disease increased to its highest mark since last Friday. Dec. 4.

Gov. J.B. Pritzker on Wednesday, Dec. 9 noted the importance of testing in suppressing virus positivity rates and targeting actions for mitigating spread. He was joined by Rajiv Shah, president of the Rockefeller Foundation, which is coordinating a national COVID-19 testing action plan.

Pritzker said the foundation has been “an important convener of public health officials and elected leaders to exchange best practices for protecting the health of their communities.”

“Testing is really the only way out of the false choice between shutting everything down and suffering widespread loss of life,” Shah said.

“The federal government bought BinaxNOW tests in bulk and delivered them to the states to use at their design,” Pritzker said. “In the absence of federal government leadership on their efficacy, the Rockefeller coalition went to work and states were able to share what they learned.”

Pritzker said Massachusetts launched an accuracy assessment on the tests and found “a minimal number of false positives,” passing the information along so that other states did not have to replicate the work.

Because of U.S. Centers for Disease Control and Prevention guidelines, the BinaxNOW tests are considered probable COVID-19 cases instead of confirmed cases, which is why the state now combines the two numbers in reporting daily case counts.

Pritzker said testing demand slowed before the Thanksgiving holiday, but an uptick is expected. The state now averages 96,000 tests per day on a seven-day rolling basis as of Wednesday, he said.

“There are now 22 states including Illinois that, on a bipartisan basis, have come together to say that we should have common protocols, share best practices, understand which tasks can be deployed at what frequency and come together to do pooled procurement, thus lowering the price of each unit of testing supplies acquired and increasing both volumes and supply,” he added.

Pritzker said he has repeatedly called for a national testing strategy through the federal government and he has repeated the request to the transition team of President-elect Joe Biden.

“Even with all the well-deserved excitement around a vaccine right now, it will be months before vaccines are available to the general public,” he said. “So it’s incredibly important that we do everything in our power to temper the spread of this virus in the coming weeks and months.”

Shah praised a University of Illinois rapid and widespread testing program that allows for frequent tests of students and faculty and results in timely contact tracing and quarantining when tests come back positive. He said the program offers a blueprint for operating schools safely.

“It is very clear to us that throughout 2021, and certainly for the first half of next year, if schools are to be open, if health care workers are to be safe, if certain essential businesses are to operate in a high background community-spread environment, testing will be more important than ever,” he said.

The Illinois Department of Public Health reported another 179 virus-related deaths over the previous 24 hours, bringing the death toll to 13,666 since the pandemic began. There have been 812,430 confirmed and probable cases of COVID-19 out of 11.3 million tests conducted.

As of Tuesday night Dec. 8, there were 5,284 people hospitalized with the virus in Illinois, an increase of 85 from the day before. Non-COVID hospitalizations increased as well, dropping the number of available beds statewide to 7,798, meaning 23.9 percent of beds were unused.

Intensive care bed use increased by 105 from the day prior to 1,176, with available beds dipping below 600 for the first time during the pandemic at 596. That left 17.8 percent of ICU beds available. There were 647 ventilators in use as of Tuesday night, leaving 69.3 percent available.

Statewide, the seven-day average case positivity rate dipped to 9.6 percent Wednesday as IDPH reported another 8,256 confirmed or probable cases among 92,737 test results reported. Regionally, positivity rates ranged from 10.3 percent in Region 3, which includes the Springfield area and several surrounding counties, to 15.4 percent in Region 7, which includes Will and Kankakee counties.