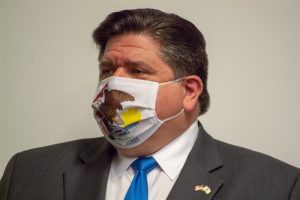 Gov. J.B. Pritzker wears an Illinois-themed mask as he waits to speak at the Emergency Management Agency Operations Center in Springfield in Springfield on Aug. 3. A spokesperson for the governor said Wednesday, Dec. 30 that the state has delivered 108,225 vaccine doses of Pfizer and 161,400 doses of Moderna to hospitals throughout the state, not including Chicago. (Capitol News Illinois file photo by Jerry Nowicki)

SPRINGFIELD — As Illinois’ COVID-19 hospitalization and case numbers have stabilized since the second-wave highs last month, the governor’s office announced 126,211 vaccinations were administered throughout the state, including Chicago, as of Tuesday evening Dec. 29.

The state has delivered 108,225 vaccine doses of Pfizer and 161,400 doses of Moderna to hospitals throughout the state, not including Chicago, according to Gov. J.B. Pritzker’s spokesperson.

On Wednesday, Dec. 30, the Illinois Department of Public Health reported 7,374 new confirmed and probable cases of COVID-19 in Illinois, and 178 additional deaths caused by the virus.

The state’s death toll has reached 16,357 among 955,380 cases and more than 13 million test results reported since the beginning of the pandemic.

As of Tuesday night, 4,244 in Illinois were hospitalized with COVID-19, a decrease of 69 from the prior day, leaving roughly 28 percent of hospital beds available statewide.

The seven-day statewide case positivity rate has remained below 8 percent for 11 consecutive days. From Nov. 7 to Dec. 7, that rate stayed above 10 percent, prompting Pritzker to implement Tier 3 mitigations throughout the state on Nov. 20.

Out of the state’s 11 mitigation regions, only four regions — Regions 3, 4, 5 and 10 — have not met the conditions laid out by the Pritzker administration to return to Tier 2 mitigations, from Tier 3.

Although Tier 2 mitigations still prohibit indoor dining at restaurants or bars, a return to Tier 2 mitigations would lessen strict capacity limits at retail stores and other Illinois businesses, and allow casinos and video gambling terminals to reopen, for example.

When Pritzker was asked about returning to Tier 2 last week, he said has no immediate plans to lift the Tier 3 mitigations currently in effect statewide.

“The challenge that we have is, what we don’t want to do is swing back and forth between mitigations and not having mitigations within days or a week or two of one another,” Pritzker said. “We need to bring it down even further and for a longer period of time.”