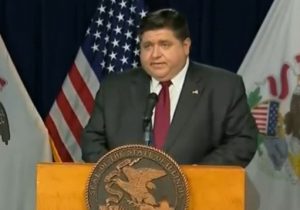 Gov. J.B. Pritzker speaks at his daily COVID-19 briefing in Chicago Tuesday, Nov. 17 after reporting that the state would issue a stricter level of COVID-19 mitigations beginning Friday, Nov. 20. (Blueroomstream.com)

SPRINGFIELD – Gov. J.B. Pritzker announced the entire state would enter Tier 3 of his mitigation plan starting Friday, Nov. 20 as he noted the best way for Illinoisans to avoid another stay-at-home order was by staying home.

“Tier 3 boils down to this: if you don’t need to do it, don’t,” Pritzker said of leaving the home as COVID-19 cases and hospitalizations continue to soar.

Pritzker, at his daily briefing, said the Tier 3 mitigations stop short of a stay-at-home order, although staying home was the best option for limiting the virus’ spread. More businesses are allowed to remain open than when he issued a stay-at-home order in March because more is known about the virus, he said.

The announcement that certain businesses — including casinos and indoor gaming terminals — would close came as the Illinois Department of Public Health reported another 12,601 new confirmed and probable cases of COVID-19 and 97 virus-related deaths Thursday.

“To be very clear, we are relying on you here,” Pritzker said. “Nobody will go door-to-door to check on you. But we’re asking people to hold themselves and each other accountable.”

The mitigations are needed, according to the governor and IDPH Director Dr. Ngozi Ezike, because hospitalizations are hitting a point of exponential growth, meaning the rate of increase is growing faster. Mitigations will be in place until numbers start to decrease significantly, the governor said.

Hospitalizations pushed past new highs again at the end of Monday, Nov. 16 with 5,887 hospital beds in use by COVID-19 patients, an increase of 306 from the day before. It’s the 23rd straight day of increases. In Region 7 of the state’s mitigation plan, made up of Will and Kankakee counties, only 12 percent of hospital medical and surgical beds, and 16 percent of intensive care unit beds remained available at the end of Monday.

Statewide, intensive care bed usage for COVID-19 increased by 14, with 1,158 beds in use at the end of Monday, pulling within 140 of the record set during the first wave. The number has increased for 12 straight days. Ventilator usage increased by 31 to 545.

“In hospitals throughout the state, one out of every four patients has COVID and that number is only going to grow,” Ezike said. “So if those COVID numbers grow, and flu hospitalizations will grow, where will someone go with chest pain? Where would they go if they acutely notice facial droop? After a car accident? We have to be able to take care of all of the people of Illinois and have the hospital capacity to do so.”

The virus spreads through respiratory droplets and when people are in close contact with one another, so the new mitigations are aimed at keeping people further apart from one another, she said.

“Right now this virus has backed us into a corner,” she said. “And we are left making insanely difficult and weighty decisions. We all want to get back to normal but we can’t get there just yet. I urge people to turn their frustration and their anger into something positive. Instead of trying to buck the mitigations, can we all just follow them, acknowledging that these are what are needed to get back to some semblance of normal?”

The guidance also calls for a “pause” of all indoor group sporting and recreational activities including youth and adult recreational sports while Tier 3 mitigations are in place. This includes park districts and travel leagues.

Outdoor sports and recreation are allowed but participant groups and practices outdoors will be limited to 10 people or less and social distancing is required along with face coverings.

Personal care services must operate at the lesser of 25 clients or 25 percent of capacity but can remain open as long as everyone wears a face covering throughout the appointment.

Indoor service will continue to be banned at bars and restaurants, which will no longer be allowed to operate gaming terminals. The businesses must close by 11 p.m. and table sizes cannot exceed six people.

The tier also closes indoor recreation centers such as theaters, performing arts centers and indoor museums and amusement centers. Outdoor activities are allowed at 25 percent of capacity or less, with outdoor group activities limited to 10 people or less, with face coverings and reservations required.

Some state House Republicans earlier in the day called for the governor to convene a special session for lawmakers to give input on mitigation plans. Democratic leaders in the General Assembly called off a planned November veto session, and when lawmakers last met in May, they decided not to pass measures allowing lawmakers to meet and vote remotely after strong Republican opposition.

Asked about including the General Assembly on Tuesday, Pritzker said he has had “discussion after discussion with individual members of the Republican caucuses” and taken into account their suggestions on “a number of industries” in consultations with doctors.

“And so again…what the doctors are trying to do is measure the risk and then take action based upon how we can limit risk, but still keep things going,” he said.

The state’s rolling seven-day average case positivity rate sat at 12.7 percent Tuesday, a slight increase from Monday but a half point lower than Friday. Of the state’s 11 COVID-19 mitigation regions, 10 had positivity rates remain the same or decrease slightly from the day prior as of Nov. 14, the latest data available.

Region 7 in Will and Kankakee counties saw its rate increase to 20.3 percent to top all regions, while Region 5 in southern Illinois was the lowest at 13.9 percent.