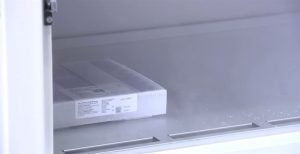 A unit of the COVID-19 vaccine manufactured by the drug company Pfizer is pictured in a freezer at the state’s Strategic National Stockpile warehouse Monday, Dec. 14. (Illinois.gov

SPRINGFIELD – The first doses of a COVID-19 vaccine approved by the U.S. Food and Drug Administration arrived in Illinois Monday, Dec. 14 but officials said there’s still a need for social distancing, face coverings and other mitigations as a full rollout could take months.

While Gov. J.B. Pritzker hailed distribution of the vaccine, manufactured by the drug company Pfizer, as the “beginning of the end” of the pandemic, many questions are still unanswerable as to the timeline of distribution for future shipments and that of a second potential vaccine.

“Today marks only the beginning of the national vaccination rollout,” Pritzker said at his daily briefing Monday in Chicago. “This week the very first recipients of the very first phase will receive their first of two doses of this COVID-19 vaccine. To put it in perspective, in total, Illinois will be receiving about 109,000 doses this week. Nationally, there are approximately 24 million people who the (U.S. Centers for Disease Control and Prevention) classifies as Phase 1A. Our destination is clear, but the road ahead will be long.”

Phase 1A of vaccine distribution includes health care workers and long-term care facility residents. Future recipients will be based on recommendations of the CDC’s Advisory Committee on Immunization Practices, or ACIP.

Pritzker and health officials said the vaccine has been developed at an “incredible pace,” but it has gone through the regulatory process “in a transparent manner under arguably the most public scrutiny of any vaccine candidate in human history.” The CDC recommended the vaccine for all Americans 16 years of age and over. Those who have had severe allergic reactions to vaccines in the past should consult with their doctor about receiving the vaccine, per the recommendations.

“The CDC has also recommended that pregnant women have a discussion with their doctor weighing the risk of taking the vaccine, or waiting for more data on vaccine safety,” Pritzker said, noting there is no data as to how the vaccine would affect pregnant women.

The governor was joined by Dr. Michael Olson, a member of the state’s independent vaccine review board, which analyzed trial data regarding the vaccine’s effectiveness and side effects.

Olson, an assistant professor of medical microbiology at Southern Illinois University’s School of Medicine, said the review board included experts in immunology, epidemiology and infectious disease among others.

“We have independently reviewed the available scientific data supporting the authorization of the COVID-19 vaccine,” he said. “We are in full agreement with the FDA authorization and CDC recommendation of the vaccine.”

The two-dose vaccine had an effectiveness rate of 95 percent among a study of 30,000 volunteers.

“Typically, local side effects were mild for redness in the arm,” he said. “Other side effects that were more systemic involved fatigue and headache, and those are most common in the younger subset of the population that was vaccinated, and they were a little bit stronger upon receiving the second dose.”

Olson said not all would have those side effects, which constitute an immune response to the vaccine.

The Pfizer vaccine — unlike the seasonal flu shot — does not contain the virus or viral material. Rather, it is an mRNA, or messenger RNA vaccine, which creates a piece of genetic code that instructs the cells to create proteins which trigger an immune response. The immune response produces antibodies that work to prevent infection, according to the CDC.  Per the CDC, the mRNA “never enters the nucleus of the cell, which is where our DNA (genetic material) is kept,” and the body breaks down mRNA soon after the material triggers the necessary immune reaction.

“Long-term side effects are unknown at this point in time, given the length of time that is available to study the vaccine. The report was very careful to state that we have watched this for two months post-second vaccination and so the data at this point in time reflects what is currently known,” he said.

Olson said the vaccine development was expedited because research has long been underway for mRNA vaccines in flu studies and other studies, which had yielded promising results.

“But then there became a large need and demand, an influx of money, they were able to use trial sites that were already existing, and last but not least, there were volunteers and a pandemic going on,” he said.

The effectiveness of the vaccine could be judged because those in the study who were given a placebo came down with COVID-19 at a higher rate than those who were given the actual vaccine.

“So a question we often get is that ‘will you get the vaccine?’” he said. “And as an advisory committee, or as a workgroup, we would say, ‘Yes we will.’ And we will get that when it’s our turn.”

He added recipients cannot be infected with COVID-19 after receiving the vaccine and cannot spread the virus because they have received the vaccine. It is not known if a vaccinated person can spread the virus if they are exposed to it in the community.

He said it is not yet clear how long the vaccine will be able to protect the recipient, as trials have only been ongoing for two months post-second dose.

The state announced earlier Monday approximately 43,000 doses of the vaccine were delivered to the state’s Strategic National Stockpile. Chicago also received a direct shipment from the federal government, while health departments in Cook, Lake, Madison and St. Clair counties will receive shipments this week as well, according to the governor’s office.

Illinois Department of Public Health Director Ngozi Ezike said the state will track each dose of the vaccine in an existing state immunization registry, which vaccine providers must update in a timely manner.

The system will allow the state to target the vaccine to underserved communities, according to Ezike.

“At the state level we will be able to see who has been immunized and which parts of the state where there’s more uptake of the immunization, which areas that maybe don’t have enough uptake,” she said, noting they can target education or outreach efforts based on the information.

Another vaccine, manufactured by the drug company Moderna, has also been submitted for FDA Emergency Use Authorization, but Pritzker said it is unclear how many of those doses would be received once it is authorized. Pritzker said he was hopeful the Moderna vaccine could be approved by next week.

“Starting next week with the potential FDA approval of the Moderna vaccine, Illinois will begin reserving portions of our weekly shipments for residents and staff of Illinois long-term care facilities,” Pritzker said. “The federal government is directing and managing that distribution, and those vaccinations through federal contracts with CVS and Walgreens.”