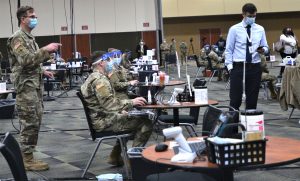 SPRINGFIELD – The state on Friday, Jan. 29 reported 58,357 doses of the COVID-19 vaccine were administered over the previous 24 hours, setting a one-day high mark for the third straight day.

Still, only 26.4 percent of the 496,100 doses distributed to the federal Pharmacy Partnership program have been administered to residents of long-term care facilities through nationwide pharmacy chains CVS and Walgreens.

Gov. J.B. Pritzker has faced criticism for the slow rollout of the vaccine to long-term care residents. Pritzker said Thursday, Jan. 28 that he had spoken to leaders from Walgreens and CVS, and said the companies plan to have the first round of vaccinations at assisted living and long-term care facilities complete by Feb. 15.

On Thursday, Jan. 28, Senate Republicans sent a letter to the governor requesting a “clear explanation” as to why Illinois ranked near the bottom of states — as of Friday it was 47th of 50 — in percentage of population that has received at least one dose of the vaccine. That was according to the New York Times, which showed only 5.1 percent of Illinoisans had received one dose of the vaccine as of Friday.

Pritzker responded to the lawmakers in a letter, noting his administration made $25 million in grants available to beef up staff, training and rental space at the state’s 97 local health departments through which it is coordinating the vaccination plan.

“In fact, as we have helped local health departments overcome their challenges, the state of Illinois is administering more doses a week than it is receiving from the federal government,” Pritzker wrote in his response letter.

Pritzker said the New York Times showed Illinois was seventh in the nation for total number of doses distributed, which was right beside California, Texas, Florida, New York and Pennsylvania — states cited in the GOP letter.

“All but one of those states has received more vaccine on a per capita basis than Illinois has at the CDC’s last count — and yet, we have kept up with them despite having less to work with,” he said.

While the Republican lawmakers criticized Pritzker for “blaming the previous President, the federal government and CVS/Walgreens,” Pritzker said, “having a partner” in the Biden administration will ensure a quicker rollout.

He pointed to an announcement on Jan. 28 that the Federal Emergency Management Agency will provide Illinois with an additional $43 million to “expand our mobile vaccination operations and offer more easy-access locations for our residents as the national vaccine supply increases.” He also cited President Joe Biden’s plan to secure 200 million additional vaccine doses.

“Of course, as I and governors across the political spectrum have made clear, the current national vaccine supply pipeline is completely inadequate for national demand — a product of the previous presidential administration, whether or not you’d like to name it as such,” the governor wrote to the GOP lawmakers. “In a country of 330 million, the CDC estimates that only enough doses to fully vaccinate about 23 million people have even gone out the door —and that doesn’t count delays in administration or reporting.”

In total, the state has received slightly more than 1.8 million doses of the vaccines manufactured by either Pfizer or Moderna, with about 1.3 million distributed outside of the long-term care partnership program. Of those outside of the partnership program, 59 percent, or 756,444, have been reported administered. Vaccine administrators have three days from when the shot is given to report it.

The vaccination rollout continues amid falling positivity rates. On Friday, Jan. 29, the state’s rolling seven-day average case positivity rate was 4.3 percent, marking the 21st straight day it has decreased and the lowest it has been since Oct. 12.

Hospitalizations for the virus continue on a downward trend as well. As of Jan. 28, there were 2,735 patients hospitalized with COVID-19 in Illinois, the lowest amount since Oct. 25 and a full 50 percent decrease since the beginning of December.

The state also reported another 71 deaths, bringing the death toll to 19,138 since the pandemic began among more than 1.1 million confirmed or probable cases and more than 15.8 million test results performed.

Pritzker pushes back on criticisms of state’s vaccine rollout