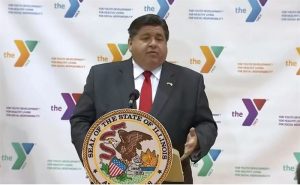 Gov. J.B. Pritzker discusses the state of the COVID-19 pandemic in Illinois during a public appearance Thursday, Aug. 13 in Bloomington. (Illinois.gov photo)

SPRINGFIELD — Illinois reported its highest single-day number of new COVID-19 infections in more than two months Friday as the state continued to experience a resurgence of the novel coronavirus disease.

The Illinois Department of Public Health on Friday reported 2,264 new confirmed infections over the previous 24 hours, the highest daily number since May 24, when the state was coming down from its initial peak.

That brings the total number of cases since the pandemic first hit Illinois to 202,691. IDPH also reported 25 additional virus-related deaths, bringing the death toll in Illinois to 7,721.

Six of the deaths reported Friday were in Madison County, in the Metro East region — an area that has seen a particularly large spike in cases. There were eight deaths in Cook County, three in Morgan County, two each in DuPage and Sangamon counties, and one each in Bureau, DeKalb, Iroquois and Will counties. 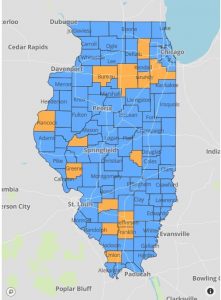 This Illinois Department of Public Health map shows the 14 counties in the state now considered to be in a ‘warning’ zone of having to return to some previous restrictions because of COVID-19 statistical increases.

Laboratories reported processing 49,541 tests over the 24-hour period, the second-highest daily test count so far during the pandemic. That made for a daily positivity rate of 4.6 percent and a seven-day rolling average positivity rate of 4.1 percent — an increase from 4.0 percent Thursday.

IDPH also reported Friday that there are now 14 counties listed at the “warning” level, which indicates an increase in two or more COVID-19 risk metrics.

As of Thursday night, 1,612 people in Illinois were reported hospitalized with COVID-19.  Of those, 345 patients were in intensive care units and 126 of those patients were on ventilators. Each of those statistics is slightly lower than Thursday’s numbers.

The rolling positivity rate in the region of central Illinois that includes Bloomington and Peoria increased one-tenth of a percentage point to 5.6 percent. That region has had seven consecutive days of rising positivity rates.

The positivity rate in southern Illinois held steady at 7.5 percent. The rates in other regions ranged from 2.5 percent in eastern Illinois to 6.6 percent in Kankakee and Will counties.

To help prevent the spread of the disease, IDPH continues to advise all people in Illinois to wear face coverings and to maintain at least a six-foot distance from others when they are out in public.