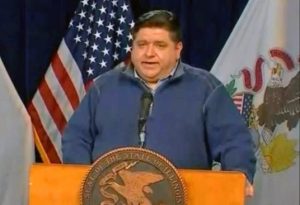 SPRINGFIELD – As the state once again reported a one-day high for COVID-19 cases and hospitalizations, Gov. J.B. Pritzker announced he would extend a temporary ban on evictions and Secretary of State Jesse White announced he would be closing driver services facilities.

At his COVID-19 briefing in Chicago on Friday, Nov. 13, Pritzker said this iteration of the eviction ban will aim at excluding “tenants who may have been taking advantage of the eviction moratorium but who are in fact able to make their monthly rent payments.”

He said the new eviction moratorium will apply only to renters who have earned no more than $99,000 in annual income or $198,000 as joint filers for this calendar year.

The governor said renters will be required to submit a declaration form to their landlord certifying that they are unable to pay their rent due to the substantial loss of income or an increase in out-of-pocket expenses stemming from the pandemic.

“This new order also clarifies that enforcement of pre-pandemic eviction orders can indeed move forward if there are serious health or safety concerns,” he said.

The state’s rolling seven-day average COVID-19 case positivity rate increased to 13.2 percent on Friday as the state reported a record 15,415 new confirmed and probable cases of the disease out of 106,540 test results reported over the previous 24 hours.

That topped the previous one-day case count record, set the day before, by more than 2,700. As of Friday, 96 of the state’s 102 counties were at a warning level for COVID-19 spread as hospitalizations once again set new highs.

The rising COVID-19 spread led the secretary of state’s office to once again shut down Drivers Services Facilities, at least from Nov. 17 to Dec. 7, as the state has encouraged all Illinoisans to stay at home except for essential doctor visits, grocery trips, COVID-19 tests or work or schooling for the next three weeks.

White’s office encouraged all to use the secretary of state online services and announced that expiration dates for driver’s licenses and ID cards will be extended until June 1, 2021. The extension includes those who have February, March, April and May 2021 expiration dates, as expired driver’s licenses and ID cards will remain valid until June 1, 2021. 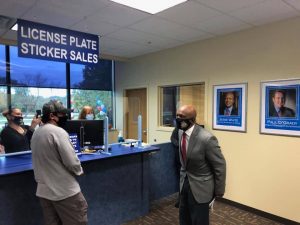 Illinois Department of Public Health Director Dr. Ngozi Ezike warned on Friday that regions 1-6 of the state’s COVID-19 mitigation plan — which covers areas not including or immediately adjacent to Cook County — are all past their peak hospitalization numbers of the first wave of the pandemic, and the other areas are nearing those peaks.

“If someone has a heart attack tomorrow, that person is also going to want to have a bed in a hospital, and whether it’s a COVID person in that bed or a flu person in that bed, that heart attack victim needs to have some care too and we need to make sure that going into these coming months, that everyone’s going to have a bed to be cared for,” she said, noting that some hospitals are already canceling elective procedures to dedicate the staff and hospital beds for more dire needs.

“The situation we face now is increasingly dangerous for health care workers and hospital systems especially in every part of our state,” Pritzker said. “More Illinoisans are in the hospital battling COVID-19 now than we saw at our highest average in the spring. And, increasingly, we have regions at risk for potential ICU bed shortages and staffing shortages, as our case rates continue to rise.”

The state also reported another 27 deaths on Friday, but Ezike said he weekend’s death toll could be much larger as there was a delay in data systems used to report death counts on Friday.

“If we want to be able to go out to eat, to finally have that wedding that’s been postponed since the spring, to visit family and friends, we need to stay home now to be able to achieve that later,” Ezike said. “And the only way we can begin to get back to normal is to reverse the trend to decrease the number of people getting infected every day.”

The death toll since the pandemic began grew to 10,504 among 551,957 cases and 8.8 million test results reported. The state reports both probable and confirmed cases together, as the number of rapid antigen tests used to identify the virus is increasing, and the U.S. Centers for Disease Control and Prevention classifies that type of test as a probable, rather than confirmed positive. About 7,500 of the more than 106,000 tests reported in the previous 24 hours were antigen tests, Ezike said.

While molecular tests which make up the vast majority of the state’s testing capacity are the “gold standard,” she said, the antigen tests also have an accuracy rate above 90 percent.

“So, whether you were diagnosed with the molecular test or the rapid antigen test, I don’t think we want to get into parsing out how were you diagnosed,” she said. “Those tests tell people who have COVID and we’re going to care for all of them the same.”

The state’s 11 COVID-19 mitigation regions had test positivity rates ranging from 12.8 percent in southern Illinois’ Region 5 to 19.8 percent in northwest