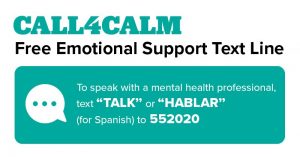 SPRINGFIELD — As residents of Illinois head into their sixth week under a stay-at-home order recently extended through May, Gov. J.B. Pritzker on Saturday, April 25 highlighted the availability of mental health services for people experiencing stress and anxiety during the novel coronavirus pandemic.

During his daily COVID-19 public update in Chicago, Pritzker reminded Illinoisans that help is available, free of charge, through the text line Call4Calm, where people can access mental health services and other informational resources.

People seeking to speak with a counselor from a local community mental health center help can text the word “talk” to 552020. Spanish-speaking residents can text the word “hablar” to the same number. A professional will respond within 24 hours.

Those seeking other kinds of information or services can text keywords such as “unemployment,” “food” or “shelter” to the same number.

The reminder of that resource came as the Illinois Department of Public Health reported 2,119 new confirmed cases of COVID-19 over the previous 24 hours — the second consecutive day of more than 2,000 new cases — along with 80 additional deaths from the disease.

That brings the statewide total since the pandemic first hit Illinois to 41,777 confirmed cases of the disease and 1,874 virus-related deaths. So far, COVID-19 has been detected in 96 of the state’s 102 counties.

Saturday’s briefing came two days after Pritzker announced he will extend the statewide stay-at-home order, with some modifications, through May 30. And while the vast majority of confirmed cases and deaths in Illinois are concentrated in Chicago and its surrounding suburbs, the governor rejected suggestions of reopening the state on a regional basis. 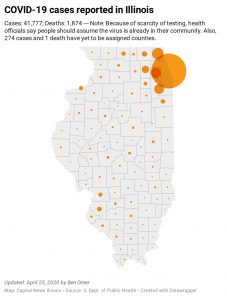 “Remember that the coronavirus does not have boundaries that it follows, so therefore this idea of saying county-by-county is sort of a false narrative,” Pritzker said. “Instead, what I would say is, infection rates, how fast is the virus moving, what’s the doubling time — these are all things that need to be looked at because you could have a sparsely-populated county where infections are doubling very frequently, and there are, in fact, infection rates in certain counties that are at a higher rate than in urban areas of the state. So I just want to keep people safe.”

Also during the briefing, IDPH Director Dr. Ngozi Ezike acknowledged that “thousands” of health care workers in Illinois were among those who contracted the disease, and some of those personnel were counted among the state’s fatalities.

Ezike did not give a specific number of medical professionals who died from COVID-19.

“It’s a sad truth and sobering truth that those who are doing the most to protect the society as a whole are falling victim,” she said. “So we thank them and we also are praying for the family members who are going to be affected by the loss as well as the whole medical community.”