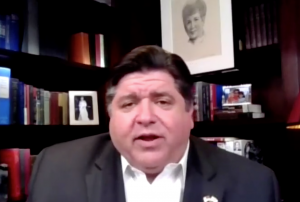 Gov. JB Pritzker speaks from his home in Chicago during Monday’s video news conference updating the state’s response to the COVID-19 pandemic. The daily news conference is now being done via video conference as he and senior staff are now working from home because a staffer has tested positive for COVID-19. (Credit: www2.illinois.gov/news)

SPRINGFIELD — Gov. J.B. Pritzker said Monday, May 11 that three of the state’s four regions are on pace to enter the next phase of reopening the state’s economy by the end of May, but he pushed back against suggestions that the state should begin to reopen earlier.

“If we were to lift all of our mitigations entirely at the end of the month, modeling shows that there would be a new surge of COVID-19 and a higher R-naught in each of the four regions, even in the least hard-hit regions of our state,” Pritzker said during his daily COVID-19 briefing in Chicago.

Public health officials said Illinois has an R-naught value of 1, and that the goal is to get it below 1 over a sustained period of time.

Monday’s briefing was unusual in that Pritzker and Illinois Department of Public Health Director Dr. Ngozi Ezike appeared separately in a video conference from their homes, a new self-isolation measure being taken after a member of Pritzker’s senior staff tested positive for the disease last week.

On May 5, Pritzker outlined a five-phase plan for reopening the state on a region-by-region basis if those regions achieve certain benchmarks.

All regions of the state are in the second phase, which allows retail stores to open for online and telephone orders for pickup and delivery, but it continues to prohibit public gatherings and require people to wear face coverings when they are in public and cannot maintain a six-foot distance from others. Golf courses and some state parks may open under IDPH guidelines, and hospitals can resume performing elective surgeries.

In the next phase, known as the “Recovery,” face coverings and social distancing will still be required but manufacturing, offices, retail, barbershops and salons may reopen to the public, provided they comply with capacity limits and other safety precautions mandated by IDPH. People will also be allowed to gather in public in groups of 10 or fewer.

One of those benchmarks is to lower the percentage of tests that come back positive to below 20 percent and to keep it there for 14 days. Pritzker three of the state’s four regions are currently below that mark. And while the northeast region, which includes Chicago and the surrounding suburbs, was at 22.3 percent as of May 8, he said there still is time for that region to meet the benchmark by May 29. 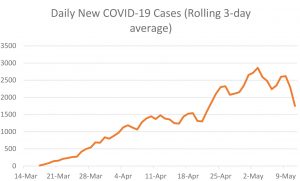 The third requirement is that a region have a “surge capacity” of at least 14 percent of its surgical beds, intensive care unit beds and ventilators. Pritzker said all four regions of the state were meeting that benchmark as of midnight Friday, May 8.

“A pushing out of our peak is a natural consequence of flattening the curve,” Pritzker said. “Remember that no one can truly stop this virus without a vaccine. But what we’ve been aiming to do since early March is slow down the exponential rate of transmission. When we do that, it leads to a slower rate of infections over a longer period of time, giving our health care system the ability to treat those who have complications and giving our pharmaceutical researchers time to develop effective treatments and potentially a vaccine.”

So far since the pandemic first hit Illinois, there have been 79,007 confirmed cases, including 3,459 virus-related deaths. The disease has been recorded in 98 of the state’s 102 counties.

Meanwhile, Illinois’ top health official on Monday said the state has received its first shipment of Remdesivir, an antiviral drug that has proven early success as a treatment for COVID-19 patients.

Dr. Ngozi Ezike, director of the IDPH, said the federal government shipped 140 cases of Remdesivir vials to Illinois on Saturday. She said each case of the drug, which is injected intravenously, provides treatment to about five patients.

“The National Institute of Allergy and Infectious Diseases recently conducted a clinical trial and found that patients who received Remdesivir had a statistically significant shorter time to recovery, compared to those receiving a post placebo,” Ezike said during state leaders’ daily briefing on COVID-19.

Ezike said IDPH sent cases of Remdesivir to 14 hospitals around the state by considering hospitalization and intensive care data, as well as hospitals that are treating the most critically ill patients and patients of color.

“We do expect to receive more Remdesivir in the future, but our hope is that the allocation that we received on Saturday can already help to improve outcomes for some patients who need it most,” she said.