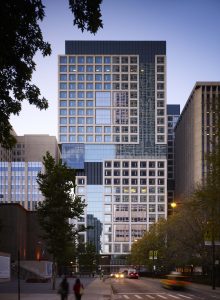 Ann and Robert H. Lurie Children’s Hospital in Chicago will partner with four health centers that serve low-income and underserved residents of the city’s west and south sides to perform 400 additional daily tests over the next several days. In the Metro East area, three locations of the Southern Illinois Healthcare Foundation system will test an additional 470 people per day.

“We’re making sure that our plans reflect equity in access, in testing and in treatment. And we’re asking the same of healthcare providers across the state,” Pritzker said at Friday’s daily briefing in Chicago.

The Illinois Department of Public Health reported 1,465 new cases of COVID-19 on Friday. IDPH also reported 68 new deaths, including a Cook County man in his 20s and a woman in her 30s. The total number of cases is now 17,887 with 596 deaths.

Early data from IDPH has shown that Illinoisans of color, especially African-Americans, are disproportionately affected by COVID-19, as black people represent about 43 percent of fatalities from the virus.

IDPH Director Dr. Ngozi Ezike said black people are five times more likely to die from the disease than white people, in part because they experience higher rates of other ailments like heart disease, stroke, cancer, asthma and diabetes.

Black Illinoisans are also more likely to work jobs with a higher risk of exposure, as well as be underinsured or have less access to medical care.

“We will not stand idly by while one segment of the population bears an unfortunate, heightened burden of this disease,” Ezike said.

Along with increased testing for minority communities, Pritzker said the state will soon distribute to hospitals 15 testing machines from Illinois-based Abbott Labs, which can give results within minutes. Four will go to Chicago, three to the Metro East, three to Illinois Department of Human Services facilities and five to state Department of Corrections facilities.

Pritzker also announced new state guidance to prevent discrimination in medical treatment along many demographic lines, including race and ability.

“It is essential that health care institutions operate within an ethical framework and consistent with civil rights laws that prohibit discrimination in the delivery of health care,” the guidelines read in part.

Among other things, the new guidance warns against “quality of life” assessments based on a person’s disability. They also encourage health workers to communicate with patients and recognize their own implicit biases.

Pritzker said the guidance makes sure “vulnerable and historically marginalized communities must receive equitable care, so that no person of color or person with disabilities suffers a disparate outcome due to a legacy of discrimination.”

Pritzker also announced that 2,000 rooms at empty hotels across the state that are prepared for mild COVID-19 patients will be ready to be activated “by next week” based on local needs. 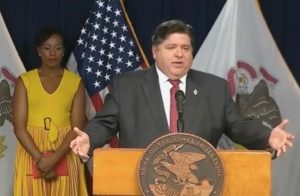 Gov. J.B. Pritzker tells reporters the state is in “a war” in its battle against the coronavirus pandemic in Illinois. He spoke during his daily news conference Friday, April 10 in Chicago. (Credit: blueroomstream.com)

Rooms will be available for people who have tested positive but have low-level symptoms that do not require hospital care, as well as people under investigation who might need to move out of their homes so not to expose family members or roommates.

The state is also opening a handful of shuttered hospitals in case of overflow at existing hospitals. Dr. Suzet McKinney, CEO and executive director of the Illinois Medical District, is leading the effort.

McKinney said the targeted construction completion date for two hospitals in the suburban Chicago cities of Blue Island and Elgin is April 24 with two additional days to train staff. She said construction should be completed at Vibra hospital in Springfield by May 9.

Although the target dates for opening these facilities is weeks away, Pritzker said “the timing here is correct” considering when cases are expected to peak and when surrounding hospitals may reach capacity.

Stay home for the holidays

Later this month, Orthodox Christians will celebrate Easter and Muslims will observe the beginning of Ramadan.

“I am grateful for all of the churches who have decided and listened to the mandate and stopped having church the way we had it in the past,” said Bishop Simon Gordon, a pastor from Chicago’s South Side, at Friday’s briefing.

Pritzker, who is Jewish, said he has participated in two Passover Seders over videoconference.

“I will say that it was almost fun,” he said with a smile. “Because you can connect with people that might not otherwise be able to get to your home on a typical Passover or typical Easter.”

Pritzker told religious Illinoisans that the safest way to observe their faith’s holiday is to stay home.

“Teachings from the Bible will tell you that it is our obligation to save a life if we have the opportunity to,” he said. “Staying home is saving a life, not just your own, but somebody else’s.”

To make COVID-19 information more accessible, IDPH also rolled out Friday a text messaging service in which people can text “COVID” to (312) 500-3836. For Spanish, text “COVIDESP.”

Pritzker has yet to decide whether to cancel K-12 schools for the rest of the academic year, after more than a dozen states, including three Illinois neighbors, have already made the call.

The governor said Thursday that decision will be dictated by what scientists and experts are saying about large gatherings at the end of the current stay-at-home order, which is April 30, including “what are the doctors saying about could you congregate groups of people together in the sizes that classrooms tend to be in.”