Republican Reps. (from left) Keith Wheeler, Deanne Mazzochi and Brad Halbrook speak during a video news conference Tuesday, May 19 about plans to attempt to block new emergency rules that make it a crime for certain businesses to violate Gov. J.B. Pritzker’s order for nonessential businesses to remain closed. (Credit: Zoom.us)

SPRINGFIELD – Republicans in the Illinois House said Tuesday, May 19 they will attempt to block an emergency rule from the Illinois Department of Public Health that makes it a crime for any business to violate Gov. J.B. Pritzker’s stay-at-home order.

IDPH submitted the rule to the secretary of state’s office Friday. It essentially codifies portions of Pritzker’s stay-at-home order into an administrative rule. Under existing state law, known as the Department of Public Health Act, violation of an IDPH order is a class A misdemeanor, which is punishable by up to 364 days in jail, a fine of up to $2,500, or both.

The rule was announced after a large number of businesses around the state, including bars and restaurants, announced they no longer plan to comply with Pritzker’s executive order forcing them to close.

During his daily COVID-19 briefing in Chicago on Monday (May 18), Pritzker said invoking the Department of Public Health Act was a gentler way of enforcing the stay-at-home order than other options at the state’s disposal, which include revoking a business license or issuing a closure order.

The issue could come up when lawmakers return to the Capitol on Wednesday, May 20 and the Joint Committee on Administrative Rules, or JCAR, meets to review a host of new regulations that state agencies have proposed.

Oswego Republican Rep. Keith Wheeler, a co-chair of JCAR, said during a video news conference Tuesday that he plans to offer a motion Wednesday to block the emergency rule.

“I believe that the governor’s action to criminalize folks who are trying to protect their livelihoods and support their families by threatening them with a class A misdemeanor charge is a vast government overreach at a time when small business owners are doing everything they can to just to stay afloat,” Wheeler said.

As of Tuesday, more than 98,000 cases of COVID-19 had been reported in Illinois and more than 4,379 people had died. IDPH Director Dr. Ngozi Ezike said Tuesday that that without the stay-at-home order, the death toll could have been 10 times that many. 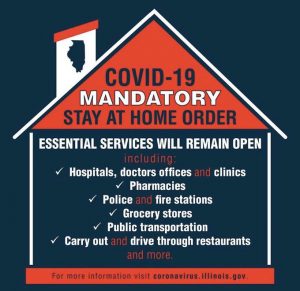 Under state law, agencies are allowed to adopt emergency rules without going through the regular review process when they determine a “threat to the public interest, safety or welfare” requires them to be adopted in less time than it would normally take to go through the normal rulemaking process.

Emergency rules are allowed to remain in effect for up to only 150 days. If the agency wants them to continue beyond that time, it must submit those rules through the regular process.

Pritzker, however, said the rule will stay in effect only through Phase 2 of the reopening process, which is likely to end May 29. After that, he said, IDPH will issue another emergency rule tailored around Phase 3, when offices and retail businesses will be allowed to reopen under IDPH guidelines.

JCAR is a 12-member committee, divided evenly between House and Senate members and between Republicans and Democrats, which means Republicans have six of the 12 seats. But overturning an emergency rule requires a two-thirds majority, or eight votes, which means Wheeler’s motion would require Democratic support to prevail.

But it does symbolize the growing sense of frustration many Republicans have expressed over the fact that the General Assembly has been largely sidelined during the state of disaster while all of the state’s response to the COVID-19 pandemic has been directed from the governor’s office.

“He’s letting the Democrat majority avoid legislative accountability,” said Rep. Deanne Mazzochi, an Elmhurst Republican. “He wants to use state agencies as his heavyweights. He’s threatening sheriffs that they’ll lose state funding if they don’t carry out his orders. Who voted to weaponize business licenses and utility hookups against small businesses because they’re not on board with government by I-said-so?”

Mazzochi also said Tuesday that she had filed legislation to limit the governor’s authority to revoke or suspend business or professional licenses for failing to comply with the COVID-19 executive orders.

“The emergency rules that were filed by the governor on Friday afternoon create a new crime,” he said. “It makes criminals out of my neighbors and my friends. It’s just shameful.”