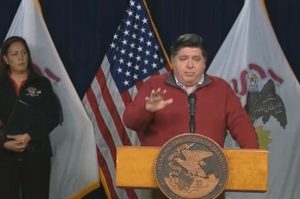 Gov. JB Pritzker speaks during a news conference Saturday in Chicago. When he was asked to comment on Illinois residents who still aren’t practicing social distancing to help slow the spread of novel coronavirus, Pritzker said, “All I can say is, those people either are not paying attention to the news or they’re stupid.” (Credit: blueroomstream.com)

SPRINGFIELD – Illinois on Saturday, April 4 became the 10th U.S. state to top 10,000 confirmed cases of COVID-19 as the state Department of Public Health announced its largest one-day increase in cases.

There now are 10,357 confirmed cases of COVID-19 in Illinois, a spike of 1,453 since Friday. There were 33 more deaths reported Saturday, bringing the total to 243. And 68 of Illinois’ 102 counties now have reported cases, while the vast majority of cases and deaths have been in Cook County.

“The number is sobering and reminds us that it’s critical that we all do our part,” IDPH Director Dr. Ngozi Ezike said Saturday alongside Gov. JB Pritzker at his daily briefing in Chicago.

Although the virus is more dangerous for the elderly, a number of younger people have died from it, including an infant. Saturday’s new deaths include two Cook County men in their 20s and 30s, as well as three people in their 40s.

Members of Pritzker’s cabinet who lead state agencies with essential employees outlined their responses to COVID-19 on Saturday, as Pritzker applauded the “frontline workers at these agencies who spend their days and nights caring for our most vulnerable Illinoisans, even in normal times.”

Since mid-March, the Illinois Department of Veterans’ Affairs has limited its veterans homes to only essential personnel and encouraged residents to limit time outside their rooms, including staggering meal times. Employees and vendors are also screened every day, including temperature checks.

“We are encouraging everyone to video chat, call and write to their loved ones at our homes,” IDVA Director Linda Chapa LaVia said.

LaVia said no resident has yet to contract COVID-19, but an employee at the Prince Home in Manteno, outside Kankakee, has tested positive. She said that employee is at home recovering.

Mark Smith, director of the Department of Children and Family Services, said nearly 9 in 10 of his agency’s employees are working from home, including everyone manning phones for its abuse and neglect hotline.

“But even with that change, we are still providing the support that families and communities depend on,” Smith said.

He added that DCFS employees who are still working in the field, such as caseworkers and investigators, are practicing social distancing and wearing protecting gear.

New guidelines for birth parents include “giving them the ability to use phone and video to replace many of their in-person contacts with their children,” Smith said. DCFS has also increased board payments to foster parents for March and April to help with additional expenses. 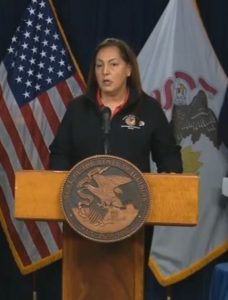 “We will continue to assess how these disruptions bring new threats to the well-being of our state’s children,” Smith said.

At the Illinois Department of Human Services, Director Grace Hou said most of her agency’s staff cannot stay home “because they are, every day, ensuring that Illinois residents have food on their table, shelter, housing support, and have access to health care, receive psychiatric care and are safe.”

At the agency’s 14 residential facilities, non-essential visits have been stopped, staff members are given health screenings at every shift change, residents have their vitals checked twice a day and cleaning has increased.

“This past Monday, we closed all but 13 public-facing offices and urged people to stay at home and to access services online and by phone,” Hou said.

The Pritzker administration this week launched an “All In” initiative, which emphasizes the need for Illinoisans to stay inside during the pandemic.

“By staying home, you reduce the amount of virus spreading in the community. That reduces the chance of someone being infected,” Ezike said. “Stay home, and let’s be all in for Illinois and do our part to end this pandemic.”

The governor’s stay-at-home executive order remains in effect through April, but can be extended.

Although Pritzker noted that “the vast majority of people in Illinois are taking it seriously,” he said people who are not complying with the order are either “not paying attention to the news, or they’re stupid.”

Pritzker also criticized the nine states that have yet to issue statewide stay-at-home orders, which as of Saturday evening includes Illinois’ western neighbor, Iowa.

“Obviously this has an effect on Illinois,” he said.

Pritzker added that issuing stay-at-home orders “should have been the job of the federal government to give guidance, in fact, to set orders for the country because we know how this virus travels.”

“I don’t understand why the federal government has abdicated its role in leadership of addressing this virus,” he said.

If Illinoisans do need to venture out of their homes, Pritzker recommended – but is not requiring – people to wear cloth masks around their faces to lessen the spray of droplets.

Pritzker first announced the new mask recommendation Friday, in line with the federal government’s guidelines. Although he could not provide a “definitive answer,” Pritzker clarified his suggestions on Saturday, saying that masks need be worn only in crowded places.

“If you’re in an area where you’re not going to run into crowds of people, it is perfectly fine to walk around and just breathe the air without having to wear a mask,” he said. “But, if you’re going into an area, stopping at a gas station, at a pharmacy, at a grocery store, or heading to one, it’s a good idea, in my opinion, to wear one.”

As for the state’s inventory of N95 respirator masks, which provide increased protection for health care workers and other first responders, Pritzker said Illinois has received only 500,000 of the 7 million it has requested from the federal government.