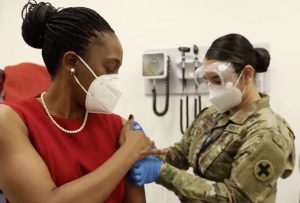 An Illinois guardsman administers the second dose of the COVID-19 vaccine to Illinois Department of Public Health in February at the Cook County North Riverside clinic. (illinois.gov)

That brings the number of state-supported mass vaccination sites to 18, according to the governor’s office, while there are more than 880 sites throughout the state where eligible recipients can be vaccinated. Information on where to find vaccination sites and appointments is available at coronavirus.illinois.gov, although appointments are still limited due to limited supply.

Those currently eligible for the vaccine include people age 65 and older and those age 16-64 with preexisting conditions and comorbidities, as well as frontline essential workers and inmates.

According to a New York Times database, Illinois was 23rd of all states with 16 percent of its population having received one dose of a COVID-19 vaccine as of Tuesday, March 2 – numbers that did not yet include distribution of the Johnson & Johnson vaccine which was approved over the weekend.

The state was 46th overall, however, for percentage of the population having received two doses of vaccine as of Tuesday, sitting at 6.8 percent. By Wednesday, that number was at 7.11 percent, according to the Illinois Department of Public Health.

Providers in the state have received more than 3.8 million doses of COVID-19 vaccine, and more than 2.9 million, or 75 percent, have been administered, according to IDPH.

As of March 1, more than 1,070 National Guard members were deployed across the state to assist with COVID-19 response and vaccination efforts.

While the state announced the deployment of new mobile teams in the state’s southern seven counties, similar teams are currently operating in Cook, St. Clair, Sangamon, Jackson, Winnebago and Madison counties. Those teams are deployed to reach rural and underserved communities with priority sites determined by local health departments.

There is no charge to receive a COVID-19 vaccine and insurance is not required. The vaccine will be administered regardless of immigration status, according to a news release from the governor’s office.

The state expects to receive 100,000 doses daily from the federal government later this month, so the added vaccination sites are an effort to build the capacity needed to administer the added supply, Gov. JB Pritzker said in a news release.

The 18 state-supported mass vaccination sites can distribute between 135 doses daily in suburban Cook County to 6,000 daily at the United Center arena where the Chicago Bills and Blackhawks play.

A site in Peoria can administer 2,100 doses daily, while one at Southern Illinois University can administer 540 daily, among others. There are 12 such sites in Cook County, as well as in Carbondale, Belleville, Springfield, Winnebago County, Collinsville and Quincy.

Meanwhile, virus transmission rates and hospitalizations continue to remain near their pandemic lows. The COVID-19 case positivity rate was 2.4 percent Wednesday for the fifth consecutive day.

As of Wednesday, a total of 70 variant cases have been identified in Illinois, including 69 of the variant first found in the United Kingdom and one first found in South Africa.