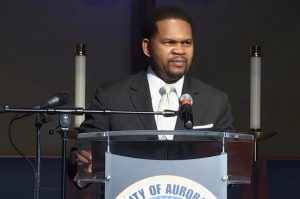 Aurora Mayor Richard J. Irvin speaks during a Tuesday, March 2 news conference in Aurora announcing the opening of a new mass vaccine site in the city that is aimed at serving the Black community. Gov. J.B. Pritzker was also in attendance. (illinois.gov)

SPRINGFIELD – Gov. J.B. Pritzker announced Tuesday, March 2 the opening of a new mass vaccination site in Aurora that will be focused on equitable distribution of the COVID-19 vaccine to the Black community as supply increases.

“People of color disproportionately suffer from pre-existing conditions, which makes COVID-19 more dangerous for them,” Pritzker said at a news conference to announce the opening. “Black Vax Aurora recognizes this and is fully open to people of all ages…with pre-existing conditions. That’s important to address equity in vaccine administration.”

The new vaccination site will receive vaccine doses from the Kane and DuPage county health departments.

As of March 1, 1,231 COVID-19 patients were hospitalized. Of those, 281 patients were reported in intensive care unit beds and 148 were reported on ventilators. The hospital bed and ICU usage both represented the lowest points since the state began reporting the numbers in April. 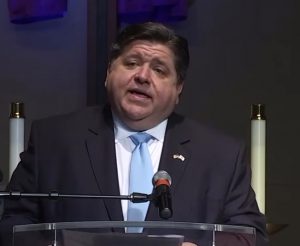 Gov. J.B. Pritzker speaks at a Tuesday, March 2 news briefing announcing the opening of a new mass vaccine site at an Aurora church that serves the Black community. (illinois.gov)

Meanwhile, the seven-day rolling average of vaccines administered reached its highest to date at 80,416 doses. On Monday, 61,061 doses were administered in Illinois. As of Monday night, a total of 2.8 million vaccine doses have been administered in the state, including 324,827 for long-term care facilities.

Pritzker said at Tuesday’s news conference that one in six Illinois residents have received the first dose of the vaccine. A total of 6.8 percent of the population has received both doses.

“With public commitments from the White House to send an average of at least 100,000 doses per day to Illinois by mid-March, we are getting closer and closer to widespread availability. That’s what we all want,” Pritzker said.

IDPH has reported a total of more than 1.18 million cases of COVID-19 of 18.2 million total test results reported, including 20,583 total deaths since the pandemic began.

IDPH said by Wednesday, March 4 it expects to receive 83,000 doses of the one-shot Johnson & Johnson vaccine, which received Emergency Use Authorization by the U.S. Food and Drug Administration over the weekend.

“The new Johnson & Johnson vaccine will be distributed for use at mass vaccination sites across the state, so that we are maximizing their capacity and getting as many eligible Illinoisans vaccinated as possible so that we can win the race against the new virus variants and end this pandemic,” IDPH Director Dr. Ngozi Ezike said in a news release.

More than 90 percent of the 83,000 doses of the new vaccine will be distributed to mass vaccination sites throughout the state, according to a news release.

Officials also announced Tuesday that Illinois residents aged 65 or older can begin scheduling vaccination appointments at the United Center in Chicago starting Thursday. More than 100,000 appointments are available, according to a news release.

The United Center site will have the capacity to administer 6,000 doses per day from a direct federal supply of vaccines.

Senior citizens are given priority for scheduling until March 7 when the remaining Phase 1B-plus eligible residents can start scheduling their appointments as well. The site will open on March 10.

Those eligible under Phase 1B-plus include non-health care essential frontline workers, inmates and those 16 years or older with underlying conditions.