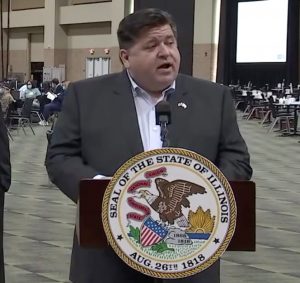 Gov. J.B. Pritzker also gave an update Monday, Jan.25 on the state’s vaccination effort, noting the coronavirus.illinois.gov webpage will now have a portal to share information about the COVID-19 vaccine. The page has information about vaccine sites, eligibility, appointments and more.

On Jan. 25, the state entered Phase 1B of its vaccination plan, but Pritzker stressed at a visit to a vaccination site in Tinley Park Monday that vaccines will currently be administered by appointment only.

“The rollout of Phase 1B is truly an exciting development, but I want to remind everyone that there are only about 120,000 first doses arriving in Illinois — outside of Chicago, that is — this week,” Pritzker said. “Because of the federal supply limitations, I want to emphasize that vaccinations are being given by appointment only. I’ve said that before, but I want to make it clear so people don’t go line up at their local pharmacy or line up at their local health department.”

The website has a list of vaccine site locations and links to the website of the pharmacy, health department or other location where a vaccine appointment can be made.

Pritzker, however, said “the vast majority of people” will be unable to make an appointment immediately in Phase 1B due to restrictions of who is eligible in the phase and a limited supply coming from the federal government.

While Phase 1A prioritized health care workers and long-term care residents, Phase 1B includes people aged 65 years and older and non-health care frontline essential workers, defined as “those workers who are essential for the functioning of society and are at highest risk of exposure.”

These include first responders such as firefighters, law enforcement and security personnel; corrections officers and inmates; food and agriculture workers; postal service workers; manufacturers; grocery store workers; public transit workers; teachers and other educators; and shelter workers, among others.

To date, Illinois has been delivered over 1.6 million doses of the COVID-19 vaccine. Of those, 692,763 doses have been administered, with an average of 28,171 shots administered each of the past seven days. 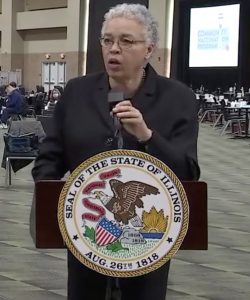 Of the doses received, 550,050 have been part of the federal government’s pharmacy partnership program which focuses on vaccinating long-term care residents through partnerships with nationwide pharmacy chains. A total of 110,403 doses have been administered through that program.

Pritzker said that program “has gone exceedingly slow,” and he noted that the vaccines given through the program are taken from the state’s federal allotment.

“All the vaccinations that are necessary for that entire group have been taken out already, of our allotment, and they sit on shelves because that federal pharmacy partnership is so slow at the job,” he said.

While the state had administered about 52 percent of the 1.1 million doses it has received outside of the program, only about 20 percent of the long-term care partnership vaccines have been administered. Pritzker also noted that actual numbers are likely higher, as vaccine administrators have three days from giving the vaccine until they are required to report it to the U.S. Centers for Disease Control and Prevention.

Pritzker said he has had “numerous conversations” with President Joe Biden’s administration about the nation’s vaccine effort. He said he is encouraged by Biden’s stated willingness to invoke the Defense Production Act, which is a U.S. law that allows the federal government to compel U.S. companies to produce supplies needed for national defense.

“The Defense Production Act allows you to free up all of the ingredients, all of the supply chain that are involved in the creation of vaccines and allows the two companies (which make vaccines), Moderna and Pfizer, to ramp up production in a more substantial way,” Pritzker said.

The vaccine update came as metrics tracking hospitalizations and positivity rates for the virus in the state continued to improve.

The rolling seven-day average positivity rate dropped to 4.7 percent, according to IDPH, decreasing for the 17th straight day and hitting its lowest point since Oct. 15.

Hospitalizations for COVID-19 fell below 3,000 over the weekend for the first time since Oct. 27, hitting 2,962. Intensive care bed usage fell to 601 beds used by COVID-19 patients while ventilator use for the disease dropped to 302.

On a rolling seven-day average from Monday to Sunday, there were 3,165 beds in use, 660 ICU beds and 349 ventilators. All three represented decreases of roughly 8.8 to 10.3 percent from the one-week period prior.

The state reported another 49 deaths Monday, Jan. 25 after reporting 135 over the weekend, bringing the total death count to 18,798 since the pandemic began. There have been more than 1.1 million confirmed or probable cases among 15.4 million test results reported.