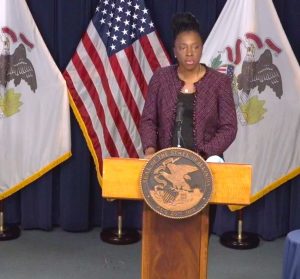 A tearful Illinois Department of Public Health Director Dr. Ngozi Ezike addresses reporters about the spread of COVID-19 at a news conference Friday, Oct. 23 in Chicago. Ezike addressed the fatigue the public is feeling in living under the pandemic. (Photo courtesy of illinois.gov)

SPRINGFIELD – Through tears, Illinois Department of Public Health Director Dr. Ngozi Ezike once again called for widespread use of face coverings Friday, Oct. 23 after warning of increasing COVID-19 hospitalization numbers that could surpass the peaks of April and May.

“I mean it’s sad to see the numbers going up again,” Ezike said at a COVID-19 briefing in Chicago. “People have worked really hard to get us through the first phase, … and as we see the numbers go up in the hospital, people are bringing more beds, trying to prepare for the COVID units again, and the staff that went through all that pain to try to save as many people as they can are seeing history repeat itself.”

“I’ve never run a marathon, but I have the utmost regard for those who’ve been able to train and plan and finish a marathon. But this is a difficult race when you can’t actually see the endpoint, and I’m sorry that that’s the message I have for you,” Ezike said.

“Nevertheless, I’m asking you to fight the fatigue,” she added. “Fight the urge to give up on social distancing. Fight for your kids to have safe, healthy opportunity to have in-person learning in school with teachers who were trained to teach them in the classroom. Fight to have safe, healthy environments in which we can work so that businesses can remain open so that our economies can start to thrive again. This does mean wearing your mask.”

Ezike and Gov. J.B. Pritzker reiterated that face coverings are the most effective means for limiting the spread of the virus, along with keeping six feet of distance from others and not gathering in large crowds. She said she is searching for a message to convey the importance of masking to all, even when meeting in private gatherings.

“And so if you’re talking about COVID fatigue from having to keep wearing a mask — think about the COVID fatigue for health care workers, respiratory therapists who are going to have to go through this whole episode again, of trying to fight for people’s lives, because we couldn’t figure out how to control this virus by doing some of the simple measures that have been prescribed,” she said.

She said the decisions of those who attend unmasked gatherings promote the spread of the virus which can then find its way to more vulnerable populations. She urged those attending unmasked gatherings to “think beyond themselves” and consider who they may unknowingly infect, especially if they have the virus but are not showing symptoms.

“All these people who work with the public on a regular basis — you cannot work from home as a bus driver,” Ezike said. “And so these people have to go to work every day as the disease is increasing throughout the state. And they’re the ones that will be dying.”

Hospitalizations for COVID-19 as of Thursday night increased by 35 from the day prior to 2,498, while intensive care bed and ventilator usage by COVID-19 patients remained well above the average of the past several weeks at 511 and 197, respectively. Statewide, 34 percent of ICU beds and 33 percent of hospital beds were available, but some regions had surge capacities below 25 percent.

Each of the 11 regions had a COVID-19 test positivity rate of 7 percent or higher, with Region 4, including the Metro East area on the Missouri border near St. Louis, hitting an 8.1 percent positivity rate. Two more days above 8 percent and the region would be subject to increased mitigations for the second time.

While Pritzker said he was not considering a statewide stay-at-home order like he levied earlier in the pandemic, he noted the state will enforce mitigation measures in the various regions subject to them.

Pritzker said he will follow emergency rules approved by a legislative rulemaking committee which allow for warnings, citations and dispersal orders for businesses not following mitigation rules. Authorities can perform checkups at locations and those not following rules “will be subject, potentially, to having proceedings initiated against them to remove their gaming or their liquor licenses,” he said.

Pritzker has noted the Illinois Department of Commerce and Economic Opportunity will give preference to businesses in regions that have had increased mitigations when it distributes Business Interruption Grants funded by the federal government.

He also once again urged federal action on a measure to provide funding for state governments and more grant opportunities to small businesses that have faced business interruptions.

“I’ll continue that fight. For whatever reason, that isn’t happening, the federal officials, federal congressmen, senators, the president can’t seem to get together to get that done,” Pritzker said.  “So, what I can say is that, unfortunately we still have to live by the rules here because we don’t want people to get sick and die. …The truth is that if everybody will wear their masks, we can get our businesses back open again much quicker.”

The statewide positivity rate decreased slightly to 5.6 percent Friday, as it is driven down by University of Illinois saliva tests that are not included in any of the regional data. The university contributed 8,581 of the state’s tests but only 23 cases over the previous 24 hours, a one-day positivity rate of 0.27 percent.