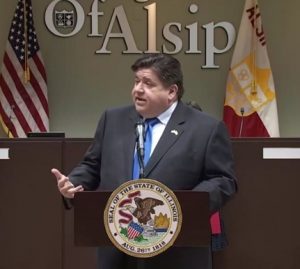 SPRINGFIELD – Illinois residents 16 years of age and older with underlying conditions are now able to be vaccinated for COVID-19 in the state’s latest expansion of vaccination Phase 1B.

“These are the most vulnerable people, really, with comorbidities,” Pritzker said at a Wednesday, Feb. 24 news conference in West Peoria. “They’re the most vulnerable populations, the populations of color, communities that otherwise are suffering the most from cases and hospitalizations and deaths. And so we want to make sure to cover that those communities as quickly as we possibly can.”

Phase 1B-plus officially went into effect at state-sponsored vaccination sites outside of Cook County Thursday, Feb. 25. A spokesperson for the governor said pharmacy chains will also be expanding Phase 1B, as they receive supply directly from the federal government.

The official announcement came as the state recorded 130,021 vaccines administered over the previous 24 hours, by far a one-day record and the first one-day total that topped 100,000.

“With significantly increased supply on the way from the federal government and the Johnson & Johnson vaccine poised for approval, the Pritzker administration launched Phase 1B+ and has asked all local health departments and providers to begin vaccinating this medically vulnerable population as soon as possible,” the governor’s office said in a news release.

Previously, Pritzker has said individuals will not need to show medical records or proof of certain conditions to receive a vaccine. Rather, they will be on the “honor system.”

At this time, vaccinations are by appointment only. Those wishing to sign up for a vaccine can visit https://coronavirus.illinois.gov/s/vaccination-location and input their zip code to find locations and scheduling information.

But the governor’s office warned that vaccine appointments “will remain limited as federal supply continues to steadily ramp up.”

“We’re all struggling all across the country with the supply that comes into our states, and unfortunately no one’s getting enough supply for anything that we all want to do,” Pritzker said Wednesday.

He said if there was enough supply to vaccinate the entire population, “we actually probably could do that right now,” but the Phase 1B expansion is an effort to vaccinate the most vulnerable in the meantime.

The state has vaccinated 66,274 people each day on average over the previous seven days. More than 2.4 million of the more than 3.1 million doses received have been administered.

Pritzker said Wednesday the state expects to receive 100,000 doses daily within the next two weeks and is building up capacity to be able to administer them. A Johnson & Johnson vaccine, if approved by the U.S. Food and Drug Administration this week, could accelerate the pace at which vaccines become available.

Approximately 5.3 percent of the population has now received both doses of either the Pfizer-BioNtech or Moderna vaccines, according to IDPH. The Johnson & Johnson vaccine, if approved, would require only one dose.

According to a New York Times database, approximately 14.4 percent of the state’s population had received at least one dose of the vaccine as of Wednesday.

The state’s positivity rate – one of the leading indicators of disease spread – continued to decrease steadily, reaching 2.5 percent and nearing a low since the pandemic began. The state reported 1,884 new cases of COVID-19 Thursday out of 91,292 test results reported. The 2.1-percent one-day positivity rate was also near a pandemic low.

Hospitalizations have also steadily declined, with 1,463 individuals in Illinois hospitalized with COVID-19 at the end of Wednesday, including 334 in intensive care unit beds and 168 on ventilators.

The state reported an additional 32 COVID-19 deaths Thursday, bringing the total to 20,406 since the pandemic began among 1.1 million cases and 17.8 million tests conducted.