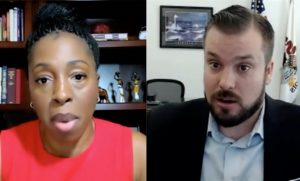 SPRINGFIELD – Public health officials gave an update on the status of the state’s vaccination efforts Tuesday, April 27 as the number of vaccines administered in Illinois topped 9 million.

Speaking in a joint hearing of the House Human Services and Health Care, Illinois Department of Public Health Director Dr. Ngozi Ezike said the state is “closing gaps” in providing COVID-19 vaccine doses to underserved populations and anyone in the state who wishes to receive one.

“I’m really proud of the work that has been done,” Ezike told the committee. “We have had equity at the forefront for the entire process.”

Ezike said the state is continuing to reach all populations through strategically-placed vaccination sites as well as regular mobile missions conducted by members of the Illinois National Guard.

As of Wednesday, April 28, Illinois had administered just over 9 million vaccine doses, while just over 30 percent of the state’s population has been fully vaccinated against COVID-19.

Over half of the state’s eligible population has received at least one dose.

While the state’s overall vaccine picture continues to improve, some lawmakers questioned Ezike on the steps being taken to address lingering vaccine hesitancy among some people.

Ezike told lawmakers the state’s health communication can only go so far in educating the public. She said individuals who have gotten the vaccine, along with trusted members of the community such as medical providers and religious leaders, should remind those they know to get vaccinated.

“We know that it’s not always going to be about messages that come from public health, people want to hear it from people that they personally know.” Ezike said.

Andrew Friend, deputy director at IDPH’s office of preparedness and response, added that as more of the state’s population receives the vaccine, the state would begin to shift from a “mass vaccination” approach to “convenience vaccination” strategy.

Ezike and Friend said this next phase could include allowing residents to get vaccinated by their primary care physician rather than needing to visit a mass vaccination site or pharmacy provider, and allowing walk-in vaccinations at all vaccination sites.

“It’s going to take all the pieces of the puzzle to come together and be successful,” Friend said. “That shifting strategy is coming.”

Ezike said allowing primary care providers to administer COVID-19 vaccines could also be helpful in addressing any lingering vaccine hesitancy, and would make it easier for residents who are unsure of how to get a vaccine.

“An individual who maybe has some hesitancy, wasn’t sure about it, hears it from their trusted health care professional, and then they can get it right then,” she said, as opposed to having to sign up at a mass vaccination site and make an appointment online.

“We are absolutely pivoting to get it in as many hands of actual providers,” Ezike said.

Republican Rep. Adam Niemerg of Dieterich questioned Ezike over the state’s mask mandate and public health guidelines, including how the state or businesses would be able to prove residents have been vaccinated when attending events.

Ezike said the state would continue to follow guidance from the U.S. Centers for Disease Control and Prevention regarding the wearing of masks, and that the state is considering ways for people to prove their vaccination status, including through a digital app or another alternative less prone to damage, loss, or forgery than the CDC-issued paper cards.

While Ezike said IDPH would not require individuals to show their vaccination status to attend events, individual businesses and establishments could have their own rules in place.

“Technology companies are working on whatever protocols they want to put in place. It’s not IDPH mandated, but people, I hear, are interested in trying to make sure that their venues and their events are as safe as possible,” she added.